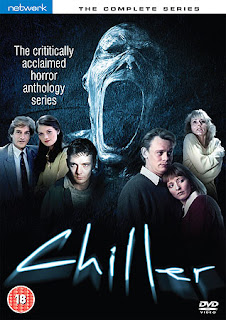 Thanks to friend-of-the-blog Stan for the news that Network DVD will release the complete Chiller anthology series on February 28th.

Produced and in part directed by Lawrence Gordon Clark, we kicked off the series with an adaptation of Peter James’ Prophecy and pulled in, as I recall, somewhere in excess of 11 million viewers. A number that ITV went on to squander by pre-empting later shows for sports fixtures.

Some of the stories were available on VHS back when dinosaurs ruled the earth, but as far as I’m aware this is a first UK DVD release. A couple of years ago I got hold of a copy of an Australian set, and that’s the only DVD version I was aware of until now. I’m not sure if I checked out the transfer quality on that one – the shrinkwrap’s off the box but I can be funny about viewing my old stuff. All I ever seem to see are things I want to fix.

The one that puzzles me by its absence from the shelves is Murder Rooms, which was shot in lovely widescreen Super 16 and released in the UK as individual shows in a piss-poor 4X3 transfer that mostly seemed to sell in Past Times shops, between the Celtic teatowels and candlestick holders. In case you didn’t see it, Murder Rooms featured period mysteries involving the young Arthur Conan Doyle and his real-life mentor Joseph Bell, in stories that interwove fictional sleuthing, biographical points, and echoes of the Holmesian canon. Made to a high standard by BBC Films, it was a fresh take on a popular subject and the episode I contributed is one of my favourite pieces of work. A second season was planned, but cancelled before the commissions went through. I found it an inexplicable decision until I read that the word around the BBC was that it had been ‘too successful for the wrong department’. In its place, BBC Drama made yet another Hound of the Baskervilles.

The US Murder Rooms complete set is widescreen but still not looking as good as it ought to; Amazon has a Swedish ‘complete season’ issue listed but at 65 quid, I’ll stifle my curiosity over how that one looks. 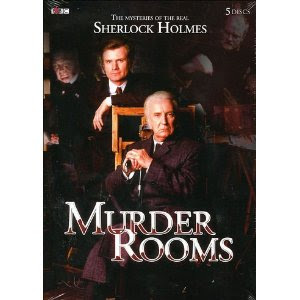