Chimera at the BFI 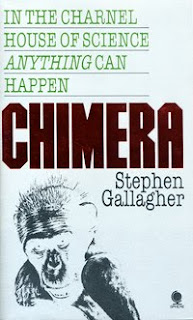 Here’s some news… on Monday July 5th as part of the Future Human season, my 1990 miniseries Chimera is getting a screening at the BFI South Bank. A while back I was asked if I’d say a few words before it, but that’s now expanded to become a Q&A with me and director Lawrence Gordon Clark.

Which feels weirdly symmetrical because back when the BFI South Bank was the National Film Theatre, they screened Chimera before it was broadcast. It was part of a season of new TV drama, and we did something similar then. I could probably dig out my twenty-year-old notes, if I made any, and give the same answers. Last I heard, they were planning to show the first two parts at about 6:30pm followed by a 30 minute break, and then the final two at 8.30pm.

The day of the screening coincides with the release of the Region 2 DVD. I have some details of those DVD extra features now. There are sleeve notes from me, Lawrence, and Executive Producer Archie Tait. There’s an image gallery, and the original press kit for the show, and the script of an earlier radio adaptation of the source novel. There’s also an on-camera interview that I did for Revelation a couple of years back when they first started pursuing the DVD rights.

In addition to that I’ve recorded some commentary for behind-the-scenes footage shot during the production. It’s been tricky to juggle, with me being here and the editor working on the footage at the authoring house in London, and I haven’t yet seen the results. But there’s a look inside the workshop of effects house Image Animation, designers and creators of the hybrid prosthetic, along with coverage of the shooting of the episode one finale and stuff from the Yorkshire locations.

Future Human runs through July and August and there’s a listing of the screenings and events here. Just take a look at some of the stuff they’re presenting. 2001, Chris Marker’s La Jetee, BBC 2’s seminal series of sf adaptations Out of the Unknown, Silent Running, The Incredible Shrinking Man, Tarkovsky’s Solaris… and also in July, a programme running in parallel, Brian Clemens, Auteur of the Avengers. Seeing my little show in there makes me feel like I crashed the A-list party of my dreams.

It just struck me that I was twenty-five when I wrote the book.

I need to sit here quietly for a while and think about that.

2 responses to “Chimera at the BFI”