A note via the website from Stefan – who says he recalls being scared witless by Chimera, as well he might since he was nine years old at the time – sent me to check out this item at movie collectables and memorabilia dealer The Prop Store. 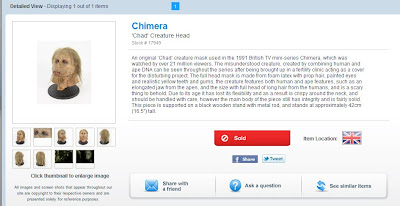 Here’s the text, to save you from squinting:

An original ‘Chad’ creature mask used in the 1991 British TV mini-series Chimera, which was watched by over 21 million viewers. The misunderstood creature, created by combining human and ape DNA can be seen throughout the series after being brought up in a fertility clinic acting as a cover for the disturbing project. The full head mask is made from foam latex with prop hair, painted eyes and realistic yellow teeth and gums, the creature features both human and ape features, such as an elongated jaw from the apes, and the size with full head of long hair from the humans, and is a scary thing to behold. Due to its age it has lost its flexibility and as a result is crispy around the neck, and should be handled with care, however the main body of the piece still has integrity and is fairly solid. This piece is supported on a black wooden stand with metal rod, and stands at approximately 42cm (16.5”) tall.

I’ve no idea what the piece was selling for, as Stefan already had it reserved. My recall is that there were three full head masks created for the show, with every hair hand-stitched into the scalp. Each was a latex skin that fitted over a headpiece core moulded to actor Douglas Mann.

From the way it’s painted I’d guess that it’s the one used in the barn scene in episode four. I’d be fascinated to know where it’s been for all these years. In the mid-90s, one of the Chad masks and costumes featured in a horror exhibition of TV and movie freaks and monsters on Blackpool’s promenade – I went along and saw it there, a figure posed in a gloomy cellar like some latterday Elephant Man.

Around the time of filming, I asked sculptor Little John to give me a price for a resin cast finished in the style of some ancient Greek museum bronze. But then along came the tax bill for the script money, and my finances were scuppered for a while. At least I know that this one’s heading for a good home. 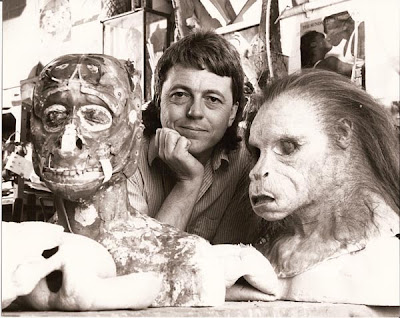 UPDATE: The Chad ‘closeup head’ is in the hands of a private collector who’s posted some pictures and details online. The closeup head had cable-articulated movement, with expressions created by offscreen operators. Due to wear and tear it’s showing its age rather more than the Prop Store’s model. You can see it here.