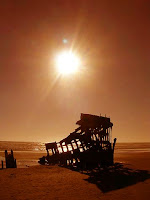 A couple of weeks ago I blogged about a new gig that promised to keep me busy through the summer, but I was coy about naming it because it was far from certain.

And I’ve avoided mentioning it since because my deal was being worked out and my ‘take’ had yet to win the approval of all the parties involved. Speak too soon in a situation like that, and it’s sport for the gods.

But now everything’s moved on a step and, from emails I’ve been getting, the word’s out anyway. So I might as well confirm that I’m handling lead writer duties on Crusoe, shooting this summer for an autumn schedule date.

NBC has placed a direct order with British production firm Power for a new adaptation of Robinson Crusoe.

The network has ordered 13 hour-long episodes of an “updated and adrenaline-charged for a 21st-century audience” version of Daniel Defoe’s classic tale.

Power founder and CEO Justin Bodle said: “This deal is the first for nearly 40 years where a leading British producer has received an order directly from a US network. It is hugely exciting to be producing a network show for NBC, and to be working with Ben [Silverman, co-chairman of NBC Entertainment] and his phenomenal creative team. Power is consolidating on its reputation as the leading creator of high-end event drama in Europe and Robinson Crusoe will be a landmark piece of television in more ways than one.”

Silverman explained: “One of our key strategies is to look abroad for great production partners. This was an opportunity that made perfect sense for us. Justin Bodle, Chris Philip and the team at Power create high-quality productions and working jointly with Universal Media Studios, we know they will combine to give new life to this classic tale of adventure.”

NBC’s remake will be the first (TV) adaptation of Defoe’s novel since 1964.

I don’t intend to keep a running production blog and I’m not going to give away any information on how we’re tackling it, either. But NBC are buying action-adventure. So don’t expect thirteen weeks of a bloke learning to milk a goat.

I know there’s a lot of curiosity about how the concept will be transferred to the screen, and my stance on that is… you’re just gonna have to watch it to find out.

Anything else just wouldn’t be showbiz.