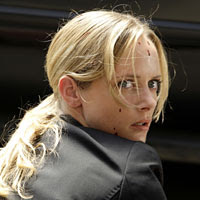 This just in from somewhere…

That was last week. This week:

A repeat CSI built +93% on its MILLION DOLLAR PASSWORD lead-in, easily placing as the #1 program in the hour and for the night. Retaining 79% of its CSI lead-in, ELEVENTH HOUR earned 1st place in its 10PM hour and 2nd for the evening overall. CBS won Thursday night and outperformed 2nd place FOX by +16%.

And that one was a repeat. I wish I could claim some of the credit, here, but it’s all down to the team.