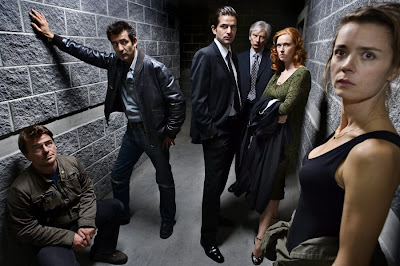 Back in June of last year I blogged about the excellent French cops’n’justice show Engrenages. Slick, stylish, seedy, complex, and wonderful to look at, it had been screened in eight subtitled parts on BBC4 and did much to convince me that in the midst of UKTV’s creative meltdown there’s still one channel where you don’t have to park your self-respect on the way in.

(The show was retitled Spiral for English-language audiences. Strictly speaking, Engrenages translates as gearwheels or machinations or any one of a number of terms that make lousy titles)

The impulse to enthuse came from the discovery that the second season was right then being screened in France by Canal Plus. In its BBC4 September press pack, the BBC’s Press Office included season 2 in the Autumn/Winter schedule. Alas, it’s now March and there’s still no sign. The DVD boxed set is available from Amazon France but appears to carry no subtitles – although if anyone knows otherwise, I’ll be happy to hear about it.

Here’s the Season Two summary from the international sales brochure of Group Telefrance:

A torched body found in the trunk of a car: a “BBQ” in police slang. A settling of scores between drug dealers, the point of entry into organized crime.

Aziz is a gang leader. The only thing to rival his violence is his volatility. His word is law to a team of lowlife dealers who ply their trade in working-class areas and the chicest districts of town. At the head of the team are the Larbi brothers who take care of larger-scale operations.

Roban, Berthaud and Clément investigate the “BBQ” and soon find themselves up against the huge machine that lies behind this sordid crime. Out of greed, Ms Karlsson makes a pact with the Larbi gang and sets out to bring down Captain Berthaud.

From urban social violence, we plunge into the heart of organized crime: international trafficking, snitches, double lives, arms dealing… As each new piece of evidence is unearthed, the case grows in complexity and danger. Only one way to break up the network: explode it from the inside.

Undercover specialist Samir joins Berthaud’s team. He manages to infiltrate the gang as the Larbi brothers’ new driver. His mission: to witness the delivery of illegal substances from big-shot Moroccan drug smugglers to the Larbi brothers. A wild journey that takes Samir into deepest Spain, where maintaining contact with him is crucial. Every second counts. The slightest slip-up means certain death…

A fascinating trip into the drug-dealing world at every level of its organization. Nail-biting suspense, constant tension, a furiously-paced season with characters that become increasingly dark, disillusioned and distorted.