Hey, Look Who We Got 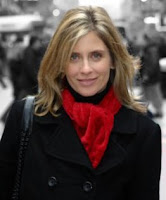 Helen Slater has joined the cast of Medea, my Eleventh Hour season closer that broadcasts on April 2nd. Yes, she was Supergirl, but she’s done loads of other stuff too.

I was curious to see how our numbers would look after Thursday night, given that we were up against George Clooney’s return to ER. Which was supposed to be a “secret”, apparently, though even I saw the memo about a month ago. The episode was Olfactus, by Angel Dean Lopez and Ildy Moldrovich. According to TVbytheNumbers.com, “ELEVENTH HOUR was first in households (7.4/12), viewers (11.78m), while averaging a 3.7/09 in adults 25-54 and 2.8/07 in adults 18-49.”

No, I don’t know what most of it means either. I do know that CBS shows get big numbers but tend to pull in older viewers, which is a yin-yang kinda thing. I think a network’s dream would be for every 20-year-old in the country to watch a given show while everyone else dies and leaves them their money. Which they then blow on the stuff they see in the ads.

In sheer numbers, the show does pretty well. Nothing to do with me, I hasten to say. I’m praising the work of others, here. It gained viewers in the weeks after its debut, which doesn’t usually happen, and it’s sustained a season average just shy of 12 million – the peak was January 15th’s H20 by Kim Newton and Heather Mitchell, which reached 15.5 million (and was directed by the UK’s Terry McDonough, from the original series).

How will my season finale do? I don’t know. We’re up against the last-ever episode of ER, and we’ve got NCAA basketball pushing us out of the timeslot for the two weeks between now and then.

But hey. It’s got Helen Slater in it.

5 responses to “Hey, Look Who We Got”