Today’s Guardian has some accurate catch-up info on Crusoe casting:

“Sam Neill and Sean Bean are to feature in a big-budget production of the Robinson Crusoe story being made by a UK independent producer for US network NBC.

Crusoe is to be played by Philip Winchester, who featured in the 2004 movie remake of Thunderbirds, while the role of Friday, his companion on the desert island, is yet to be cast.

Flashbacks of Crusoe’s life are interwoven with the action, with Bean playing his father James, Neill playing family friend Jeremiah Blackthorn, and Anna Walton playing his love interest Susannah. Joss Ackland will appear in one episode in the role of Judge Jeffreys. 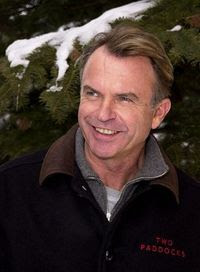 The series, written by Stephen Gallagher and directed by Duane Clark, follows the swashbuckling adventures of the two island dwellers as they contend with marauding militias, hungry cannibals, wild cats, starvation and lightning storms.”

One technical inaccuracy in there – I’m not “writing the series”. We’ve got a bunch of good people on the episodes and I’ll name them here in due course. I’m the series developer and lead writer, which in this case has involved developing the concept pitch of Executive Producer Justin Bodle for the screen, writing the bible and the two-part opener, setting the arcs and running subplots, creating backstory and writing certain continuity scenes that’ll be woven throughout the thirteen hours, and then writing the episodes that will gather up the ends and close the series.

It’s a tall order but it’s not a singlehanded effort, and the show will be all the better for that.