Well, I’m told that the information’s shown up on Wikipedia, so I suppose I’m safe to blab about it now… the good folks at JBTV were kind enough to invite me to take time off from development work to pitch something for the US version of Eleventh Hour, and my episode Subway will air on CBS on March 5th. It guest-stars Mariel Hemingway and is directed by ER alumnus Paul McCrane. My thanks to Cyrus and Ethan and everyone in the writers’ room for letting me play in their yard. 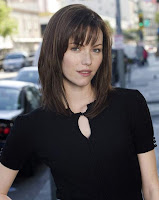 My second show is titled Medea, and it’ll be the season finale on April 2nd.

Can’t say too much about that one yet as it’s shooting right now, other than that it features Sleeper Cell‘s Melissa Sagemiller (pictured).

But I will say this – I reckon I’ve been seriously spoilt by the American pace of creation and production.