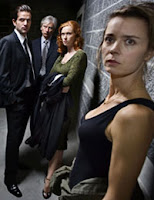 Just as I finish catching up on the second season of the French cops’n’justice drama Engrenages (UK title: Spiral, screened on BBC4 with a credit for co-production), I see from the Canal Plus website that a third season has just wrapped filming in Paris.

Season Two was drug trafficking; in Season Three it’s a serial killer, le boucher de la Villette. With any other crime show, mention of a serial killer plot would have me rolling my eyes. But Engrenages/Spiral isn’t like any other crime show. No character panders for our favour; they’re all genuinely complex, with genuine flaws. The people that we root for often do things we can’t approve of and unlike, say, 24, the mishandling of suspects is without any suggested heroic quality.

Best of all, it’s a show that doesn’t feel like it’s been pieced-together out of used-up TV.

Season Two was never going to be able to match the freshness and impact of the first, which I think I’ve watched three times now, but it still managed to build to a corker of a finale.