Paranoia and the Legacy of PKD

The Gary Sinise movie based on Philip K Dick’s Impostor was a waste of the premise, but one of my earliest and most vivid TV memories is of a 1962 adaptation in ABC’s Out of this World anthology series (that’s the British ABC, the one that produced The Avengers, not the US network).

(That’s the British Avengers, not the Marvel… ah, forget it)

Impostor is a PKD short story that involves a crashed spacecraft, and a sole survivor who’s unaware that he’s an android built around a bomb. Realising the truth will be the bomb’s trigger. Doesn’t that just send a chill though the back of your brain?

I recall a studio camera production, black and white, with cheap sets and a bit of modest model work for the crashed spacecraft. The final devastating explosion was achieved by cranking up the gain on the image so it went to white-out. The script was by Terry Nation and direction by Peter Hammond, two of the era’s solid journeymen and go-to guys for genre material. As I was only eight at the time I had to have the ending explained to me, but that didn’t diminish its power.

After broadcast, the tape was wiped and the show lost.

What lodged in my eight-year-old mind was the thrill of that notion. To think that you’re human, and not be. That the reality you take for granted may be unreliable. It’s an irresistible seed of paranoia. That’s the appeal of PKD’s fiction to filmmakers, I reckon, that strange poetry of identity with a sense of endless, unresolvable conflict.

The problem, shown up most recently in The Adjustment Bureau, lies in the inevitable drive to tame the intriguing premise in a conventional narrative. To resolve that which only grips because it’s unresolvable. SPOILER: the ending of The Adjustment Bureau is total cack.

For a proper stab at a Dickian conclusion, see Source Code, which isn’t based on a PKD story but which honours the legacy pretty well while achieving the near-impossible, a happy ending that doesn’t betray the premise. Blade Runner, famously, was sent out into the world with a patched and cobbled ending that did exactly that, until later cuts removed the clumsy fixes and allowed the ambiguities to resonate. If you don’t think that Deckard’s a replicant while I’m certain that he is, then that’s exactly as it should be. To push it to any firm conclusion is to kill the magic.

At the risk of lowering the tone, let me tell you that I drew on my memories of Impostor in the writing of a Bugs episode, once. It was in the second season, the one where we got steadily more sfnal before the BBC reined us in. My premise involved the first computer virus to jump the species barrier; the indebted twist was that awareness of the infection triggered its effects. Ros (Jaye Griffiths) grew ever more alienated from the others as they struggled to save her without being able to tell her why.

Those were the days, my friends, those were the days. I could ask for a Russian submarine or a particle accelerator and they’d get me one or build me one. If you’re interested in the story behind the show, I wrote about it here.

Incidentally, the cover illustration at the head of the piece is by Chris Moore, whose bio I contributed to Paper Tiger’s book on his art. Here’s the image in its full glory: 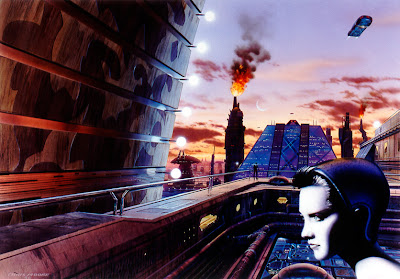 Through the Gollancz SF Masterworks series, for many Chris has become the artist most closely associated with Philip K Dick’s work. Those Masterworks covers are some of my all-time favourite SF art. You can see more like this on his website.

2 responses to “Paranoia and the Legacy of PKD”