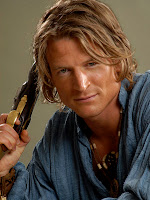 I’m still catching up, or I’d have pulled this post together before now… last Friday saw the broadcast of Andy Rattenbury’s Crusoe episode The Mutineers and this week it’s the show I’ve known all year as ‘hour five’, aka High Water by yer own James Moran.

(The ‘hour five’ business, for a show that goes out in week four, is an attempt to keep everything straight in my head after embarking on a 13-hour plan and then revising it to accommodate NBC’s request for a two-hour opener.)

I promised to name names and here they are; Hour 3/week 2 was by Avrum Jacobson, and future episodes come from Nick Fisher, Debbie Oates, Cameron McAllister, Jack Lothian, and Rohan Gavin. I’ve taken care of the two-part season closer that brings the running flashback story into the present and wraps it up.

I haven’t said much about the actual format, but a few weeks before the premiere I was asked to write something for the press release. This is from that:

Everybody thinks they know Robinson Crusoe, but what people really have is just a small handful of images – a man on a beach with a goatskin umbrella, and a footprint in the sand that everyone thinks is Friday’s (it isn’t). Although a lot of the novel is given over to Crusoe’s patient survival, it’s also a rollicking tale of captures, escapes, disasters, cannibals, mutineers and pirates. Defoe fed on the tales of adventure being conveyed back to England from the Caribbean and the Spanish Main, and he turned them into something that feels almost like documentary fiction.

It was never going to be a matter of translating the book page-by-page to the screen. The French did that brilliantly with the Robert Hoffman series in the 1960s, the one that everyone can sing the theme to. I’m not interested in competing with that memory.

What did interest me was Defoe’s world, and the prospect of being let loose in it. Certain things set me free. Part of the brief was to explore Crusoe’s backstory, and memories of the love of his life back in England. But the fact is, in the book there’s very little of one and nothing at all of the other. All we see of Crusoe’s family life is a mild disagreement with his father, and he doesn’t meet his wife or marry until the sequel, which takes place after his time on the island. But this cue to draw on wider elements pretty much opened up Defoe’s world before me. And when I read a couple of Defoe biographies as part of the background research, I knew where my pitch was going to go.

And it was pretty much this:

I grew up on great filmed adventure series that took characters from history and literature, created a world out of the source material, and then revisited that world on a weekly basis – Ivanhoe, Robin Hood, The Last of the Mohicans, Wyatt Earp, Long John Silver. I haven’t seen a show like that in years, and I really miss them.

So let’s take that slice of the novel between Friday’s arrival and Crusoe’s escape from the island, and anchor our series arc to its two major incidents – the rescue of an un-named Spanish captain, and the arrival of a shipload of mutineers whose imprisoned crew offer Crusoe his best chance of escape. In amongst those unfolding stories we develop further tales of Crusoe and Friday on their island. For Crusoe’s life and loves in England, rather than add to his life with pure invention I looked to Daniel Defoe himself.

As a child, Defoe lived through the Great Plague and the Great Fire of London. As a young man he dabbled in dissenter politics, lost fortunes in business, and got swept up in rebellion that had him hiding in fear of his life. It reads like something out of a Rafael Sabatini novel, and it’s in a blend of the creator and his creation that I found the engine for our show.

The other part of the brief was to provide action adventure for a modern audience, and I looked backwards for that one, as well. Back to Errol Flynn and Douglas Fairbanks and all those great seafaring swashbucklers from the Warner Brothers Studios. My DVD bill went through the roof.

What we’ve ended up with is a modern show that I’d like to think Defoe would recognise. It draws on his life and his obsessions as well as his most famous work.

One of the most interesting challenges has been the development of the relationship between Crusoe and Friday. Looking at Defoe’s own sources and other contemporary writings, it quickly became clear that there’s more to be explored here than a master-servant relationship. When it comes to survival, Crusoe has nothing to teach Friday and so much to learn. Every skill that Crusoe has struggled to acquire comes naturally to Friday. Crusoe can’t pronounce Friday’s true name, while Friday acquires English in a matter of months and speaks it with the eloquence of a natural linguist. Theirs is a partnership of equals in an environment where their very survival depends on it. But what Crusoe knows, and Friday can only suspect, is that if they should ever leave the island together, a very different reality awaits them.

Defoe appears to instruct, but he wrote to entertain and in doing so, he almost single-handedly and at a stroke created the novel of adventure. That’s what we’ve got in our sights with this show. We’ve got ships and shipwrecks, swashbuckling and swordplay. We’ve got amazing tropical locations that don’t look anything like your usual desert island, and a wonderfully detailed and atmospheric recreation of Defoe’s England. We’ve got great young leads and the starriest cast you’ll find on TV anywhere. And, from a personal point of view, I’ve had more concentrated fun working on this show than just about any other.

The most bizarre moment of these last couple of weeks came when I stopped to fuel the Jeep at a Shell station in Santa Barbara.

Above the pump was a TV screen that came to life and ran ads as the unleaded started to flow. First thing I heard was, “Alone on an island…” then I looked up and there was Philip Winchester with his spyglass, through the gas fumes.

Back to normal now.