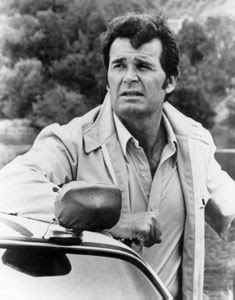 So here I am, midway through my boxed set of The Rockford Files season two, when I see the news today that David Shore, creator and showrunner of House, is lining up a revival of the show.

It’s a task both enviable and unenviable – Rockford is probably the best show of its kind, but it’ll be a tough challenge to match it. Jim Rockford was a Philip Marlowe who’d survived the Summer of Love with his old-fashioned principles intact. The format was deceptively simple. Tone was everything, and the show was one of those where its magic was an alchemical product of stylish, witty screenwriting and charismatic lead.

One of the things I’ve come to realise is there’s an underlying principle common to many a long-running show, which is “the world is scary but your dad’s here.”

I noticed it first in The Equaliser, because I couldn’t make out why the show worked; the hero wasn’t dashing, nor was he intimidating, but when he showed up you knew everything was going to be OK. Then I started noticing how many shows depended on the dad principle, or variants of it. Grissom’s a dad figure, Mac of CSI: NY is a dad figure. All the way back to James Arness in Gunsmoke and Lorne Green in Bonanza (literally), Mark Harmon in NCIS. Our own Doctor Hood.

Jim Rockford was more your big brother, but same principle… with him on the case, you could have faith in the outcome. Columbo and The Mentalist are your funny uncles. It seems to be the key to a strong format that never burns out whereas a heavily-engineered, Pushing Daisies kind of format… doesn’t matter how much you love it at first, after a while you’re going to tire.