I love this. Under the headline, Experts Warn Over Humanising Apes, the Associated Press has put out a lengthy science piece which has been picked up by, among others, The Independent – in fact it’s being reprinted everywhere, from Pravda to The York Advertiser. It begins

Action is needed now to prevent nightmarish “Planet Of The Apes” science ever turning from fiction to fact, according to a group of eminent experts.
Their report calls for a new rules to supervise sensitive research that involves humanising animals.
One area of concern is “Category Three” experiments which may raise “very strong ethical concerns” and should be banned.
An example given is the creation of primates with distinctly human characteristics, such as speech.

A tip of the hat to Chernin Entertainment and Twentieth Century Fox, for happening to launch their advance publicity for Rise of the Planet of the Apes in the very week that the story breaks… what are the chances, eh? 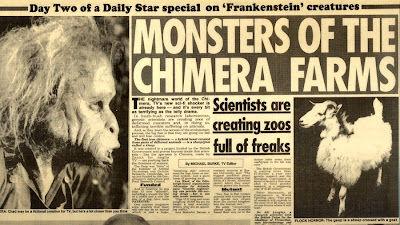 I know for sure that this kind of sensationalism is an irritant to many working scientists, though maybe not to the extent that you’d think. Apparently there’s an entire generation of computer designers inspired to their choice of career by 2001‘s murderous HAL 9000. How many people working in gene science today had their imaginations fired by the mayhem in Jurassic Park? And I know from my own experience that it’s never hard to find a scientist ready to share a beer and speculate in the aid of some extreme worst-case scenario in their chosen field.

(Would that more producers would take advantage of this, instead of regarding such due diligence as, as one critical of my method put it to me, ‘letting the tail wag the dog’.)

Science and sensation will always go together, not least because science can be pretty sensational in its own right. But there’s more involved than simple awe and the contemplation of wonder; science is our age’s way of connecting with myth, with those eternal patterns of human behaviour writ large and lurid in tales designed to captivate.

The coverage inspired by Chimera was, to put it mildly, highly speculative. Not that we didn’t encourage it. But nor, in interview, did I ever try to blur the line between actual science and the concerns of the fiction we’d based on it. When the novel first came out I met with John Burke Davies, a reporter from The News of the World, whose editor had sent him to investigate or expose this charlatan who claimed to have inside information on the whereabouts of man-made monsters. Once it was established that I was claiming no such thing, our meeting turned into an eighteen-hour pub crawl around the journalistic haunts of Manchester. I remember drinking with sharply-dressed Sun reporters in a bar panelled with timber salvaged from an R101 airship. But that’s all I remember.

The ’eminent experts’ quoted in the AP release include Sir Paul Nurse, whose encouragement toward the creation of a pro-science show set me on the path to Eleventh Hour. As far as I can tell from the selected quotes, most of them are talking about the hazards and ethical issues of modifying gene functions at the cellular level, which is where the real science is at.

Dare I suggest that the raising of ape armies and the overthrow of mankind is best left to those of us who deal in that kind of thing.