Right now I can’t do much more than pass along what’s appearing in the trades – here’s an extract from the fullest piece I’ve seen so far, in The Hollywood Reporter.

There’s also an expanded version of the Variety coverage now online. Reuters, Hollywood News and Movieweb all carry versions of the story, none of which mention the creator credit. But it’s not like I’m sensitive, or anything. Not complaining. Just, y’know. Pointing it out. 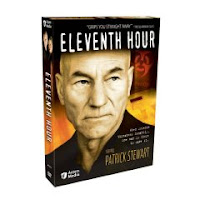 From The Hollywood Reporter:

The “CSI” trio of CBS, Jerry Bruckheimer TV and director Danny Cannon are reuniting for a new drama project based on the British limited sci-fi series “Eleventh Hour.”

CBS has ordered a pilot with a hefty penalty for the untitled project, which Jerry Bruckheimer TV is producing with Granada International Media and Warner Bros. TV. The penalty is rumored to amount to a 13-episode production commitment, and WBTV is said to be proceeding with making the series, which is expected to net strong international sales given the Bruckheimer brand’s popularity worldwide. CBS would neither confirm nor deny the deal Tuesday.

The drama centers on a special science adviser to the government who, with his feisty female bodyguard in tow, saves people from the worst abuses of science.

Feature writer-director Mick Davis will pen the script for the U.S. version. “CSI” executive producer Cannon, who directed the pilot for “CSI: Crime Scene Investigation” and is credited with creating the hit franchise’s distinct look, is set to helm the pilot.

Davis and Cannon are executive producing with Bruckheimer, Jonathan Littman and an executive from Granada to be named later.

One response to “Second Variety (2)”