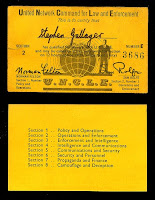 If ever you needed someone to save the world, I was your guy.

Mind you, I was only nine at the time.

I think it was an ad in one of the Man from Uncle tie-in novels that gave an address where you could write in and be recruited as an UNCLE agent. The card arrived about three weeks later in a small brown envelope. I believe that MI5 operate in a similar way today.

I might have had more confidence in the world’s prospects for international security if the office person responsible had managed to spell my name right.

There was no end to my talents back then. I was licensed to fly Supercar, as well.

7 responses to “Step Aside, Mister Bond”