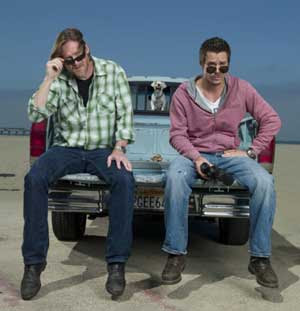 By one means or another I try to keep up with at least the pilots of the new crop of each season’s US TV shows, and in the current season one’s been the standout for me – Terriers, from FX, starring Donal Logue (who I thought was miscast in Life but is perfect here) and Michael Raymond-James (who played the Cajun guy in season one of True Blood).

Imagine the Fred Ward/Kevin Bacon team from Tremors transplanted, along with their pickup truck, to scratch a living as unlicensed private eyes in a beachfront suburb of San Diego, and you’ll have a sense of what it’s about.

Not an exact sense, of course, because this isn’t a high-concept drama; the private eye thing gives it genre credentials and offers the viewer a point of entry but once inside, it’s a character-driven show. One of the questions you’ll often hear in development is, “What’s [insert name of main character]’s superpower?” These characters don’t have any. They’ve got their wits and their good hearts and their tenacity, and they’re written and played in such a way that they will – if you commit to the show and get to know them – win you over.

And therein lies the problem. Terriers is a critics’ darling but almost no one has been watching, despite a pedigree that includes creator Ted Griffin (Oceans 11) and showrunner Shawn Ryan (The Shield) and a bunch of gorgeously-shot stories that balance intrigue and emotion. It’s hard to win over an audience that doesn’t show up.

Various reasons have been offered for the audience’s failure to find the show (do you see what I did there?) Some blame the title, which I suppose doesn’t help; it wasn’t much of a hook for me, I know. Others blame a misleading/off-putting advance campaign, which I can’t comment on because I didn’t see it.

The latest argument I’ve heard is that Terriers is at odds with the FX ‘brand’; though it seems to me to be a perfectly compatible companion in tone and content to Justified, FX’s hit of a previous season.

As I write this, the show’s first season is coming to a close and the prospect of a second is far from certain. I think FX would be mad to dump this gem. They’ll search long and hard to find a property of this quality and it makes far more sense to regroup, try again, maybe with a ‘special event’ marathon rerun of the entire season, and get the marketing right this time.

UPDATE: ‘Twas not to be. FX cancelled the show on December 5th.