Patrick Macnee tells the story of how, one day in Toronto, he bumped into Peter O’Toole who asked, as you do, what Macnee was up to these days. Oh, says Macnee, I’m doing The Avengers.

Season four was the first set of shows made on 35mm with the American market in mind. I’d been aware of the series before that, but I can’t say it had been a favourite. Those earlier episodes had been studio-bound. Studio-bound TV drama (I now realise) always had stolid theatrical pacing while multiple cameras cut around the performances, pretending to be film.

The seeds of it were all there in the live shows, and it was working for plenty of viewers, but it wasn’t yet working for me. My mother had taken against Patrick Macnee for no reason at all (“Look at him. The big girl”) and that didn’t exactly help.

I also have to say that I found Honor Blackman’s Cathy Gale a little, er, scary (I don’t think it was my young age. I still find her scary now!)

I never quite ‘got’ the stories, and the dialogue-heavy studio scenes moved at a finger-drumming pace. Those electronic cameras and vision-mixer cutting were particularly cruel to the staging of fight scenes – in Quatermass and the Pit they’d addressed the problem by shooting the sequences of physical action on film and dropping them in. The live-studio Avengers didn’t, so the action could never be very extensive, or overly convincing. 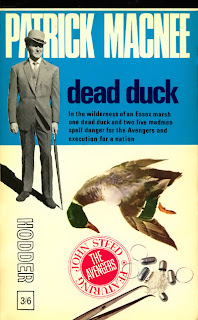 But here’s why I think it’s important that Macnee was “always doing The Avengers“. I’ve been involved in the setting-up of a number of shows – some you’ll have seen, many that you won’t because they never got any further than the drawing-board – and I know how tricky the creation of a format can be. I also know that never, in a million years, could you sit down and devise The Avengers as it appeared in that 1965 season.

That’s because The Avengers, 1965, hadn’t been devised; it had evolved. The elements had been cooking and changing for three seasons. Steed had mutated from mysterious authority-figure to unpredictable dandy, mainly thanks to a constant seepage of Macnee’s own personality into the role. When Ian Hendry, the original series lead, left the show, his replacement by Honor Blackman meant that a conventional man-shaped place in the structure was unconventionally occupied by a woman. This shook up and redefined viewer expectations much as Sigourney Weaver’s Ripley would later redefine the big-screen heroine. Sidney Newman might have been the show’s originator, but it was the dominating narrative touch of Brian Clemens as both writer and producer that gave the series its increasingly light, tight and surreal flavour.

And then it went to film. Honor Blackman dropped out to play Pussy Galore in Goldfinger, and Diana Rigg’s Emma Peel took over in a piece of casting that had adolescent boys of all ages weeping in gratitude. The mix that had been brewed up in the creaky and low-res live-action studio now exploded with the application of top-drawer production values. The result was unique and confident. It didn’t so much mirror the swinging sixties as play a major part in defining them.

And you know what else? It was uncompromisingly British, through and through. It didn’t conquer the American market by pandering to American forms and expectations, as so much product since has attempted to do. Like Danger Man, like The Saint, like Monty Python, like any cultural product of ours that the US has taken to its heart, it had a zero prostitution factor in its casting and its subject matter. 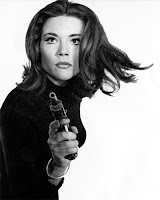 Season four was the black-and-white season, with such classics as The House that Jack Built, Castle De’Ath, The Cybernauts, A Touch of (gulp) Brimstone. Season five went to colour and hit the same level of triumph with knobs on. But it’s those episodes in ‘sparkling black and white’, as the American trailers described them, with their stark op-art world and King’s Road sensibility, that made the first and deepest cut for me. There is a place forever in my heart where the door to Emma Peel’s flat has a big eyeball on it.

The Thorson episodes were fun, and I tend to underrate them consistently. And The New Avengers had its moments, if you can manage to forget the sub-par Canadian-shot episodes, but by then it had become a show that, with its ITC-style triangle of The Father, The Lad, and the Desirable Tomboy, you absolutely could have sat down and devised.

You couldn’t grow a show like The Avengers now. Our schedulers think they’re being bold if they commission more than four of anything, and from the first broadcast they’re watching the ratings and poised ready to kill.

Let’s not even talk about the feature film, eh?

8 responses to “The Avengers”