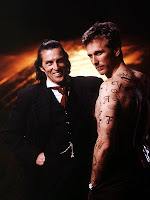 More from The Hollywood Reporter on developments in the US version of Eleventh Hour.

I have to tell you, the trade press is where most of my information is coming from. Any direct involvement I might have had in the production was precluded by the exclusivity clause in my Crusoe deal, made within a couple of days of the WGA strike’s end; all progress on 11thH had been suspended during the strike period and when the Bruckheimer TV people called ICM to check my availability… well, unfortunately, I wasn’t.

I have heard that the pilot show has been shooting and that it’s going well.

And I’ve been told that I get a decent show credit, despite the press coverage that continues to position me lower in the food chain than that ‘unnamed Granada executive’.

Anyway, the latest coverage suggests that the creator/producers of the short-lived but influential series Brimstone are being brought in to serve as series showrunners.

Brimstone starred Peter Horton as a dead cop earning his ticket out of Hell by hunting down each of 113 escaped souls. It had texture and energy and was probably too dark for US mainstream TV. Reaper pretty much steals the premise and, being more lightweight fare, has survived better. But Brimstone was the superior show.

Here’s what the Reporter says:

In an indication that CBS’ pilot Eleventh Hour is headed to series, Sleeper Cell creators Cyrus Voris and Ethan Reiff have been tapped as executive producers/showrunners of the Jerry Bruckheimer-produced drama.

“Hour,” from Bruckheimer TV, Warner Bros. TV and Granada TV, is based on the British limited sci-fi series and stars Rufus Sewell as a special science adviser to the government who, with his feisty female bodyguard Rachel (Marley Shelton) in tow, saves people from the worst abuses of science.

“Hour” has been rumored to go to series since September, when CBS picked up the pilot with a penalty said to amount to a 13-episode production commitment. On the potential series, Voris and Reiff will serve as exec producers alongside Davis, Cannon, Bruckheimer, Jonathan Littman and a Granada executive.

“Hour” falls under Voris and Reiff’s overall deal with WBTV. It also extends their relationship with Bruckheimer and CBS. Earlier this development season, the duo penned a treasure-hunting drama for WBTV and Bruckheimer TV, which landed at CBS with a put pilot commitment (HR 8/16).

On the feature side, Voris and Reiff recently penned the spec Nottingham, which sold last year in a seven-figure deal to Universal Pictures and Imagine Entertainment and has Ridley Scott attached to direct and Russell Crowe attached to star. The two also wrote DreamWorks Animation’s upcoming Kung Fu Panda.

Voris and Reiff, who also created and executive produced the series Brimstone, are repped by WMA, Field Entertainment and attorney Dave Feldman.

My understanding was that the series would be getting a new title. But I’m not sure how much longer they can leave it before the old one sticks.

One response to “The Brimstone Boys”