The Dodgers, Christian Slater, and Me 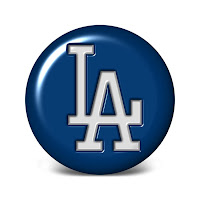 On Sunday I went to my first-ever ball game. The Dodgers vs the Chicago Cubs. Christian Slater was the day’s celebrity first-ball pitcher, and he’d invited the cast and crew of The Forgotten to attend the game as his guests.

I dithered a bit, I admit… I’m not really a sports event kinda guy. But I’m so glad I went – it made a good break from deadlines and I had a really good time. I still know bugger-all about baseball and didn’t even watch that much of the action, but the stadium atmosphere was great. Loads of kids and families and just a big, big buzz. It’s like the game is just something to hang it on. Christian had bought VIP seats behind third base for all – we weren’t all sitting together but nobody stays in one place for any length of time anyway. After I’d bought my Super Dodger Dog (all beef) I discovered that my ticket included complimentary food in the VIP suite.

I’d set out early thinking that traffic and parking would be a problem but the traffic was light and the parking lot so enormous that I just sailed in ahead of the crowds… though the rows weren’t numbered by any system that I could make out, so I made myself a map as I went to be sure I’d be able to find the car again. Amongst all the stuff they put on the big TV before the game, they played trailers for the show.

The VIP boxes were right down at ground level and out in the brutal sunshine (I’d remembered to slap on the sunblock before I set out), so when I felt I’d endured being a VIP for long enough I went up to the middle of the tier to watch from the back in the shade, and from there on bumped into various co-workers including all our cast. I was sitting having a beer and catching up on stuff with with one of our executive producers, and I swear Adam Baldwin walked past.

The Dodgers lost the game. But they’d beaten the Cubs in the other games in the series during the week, so they still came out the overall winners. I left before the end to get out ahead of the traffic, and again got away with no problems. Drove back along Sunset Boulevard and through Beverly Hills. Flopped on the bed for an hour to sleep off the sun and the super dodger dog and to reset the brain for some work.

2 responses to “The Dodgers, Christian Slater, and Me”