This Saturday, January 31st, 8.00pm on NBC; the second and concluding part of the Crusoe season finale. 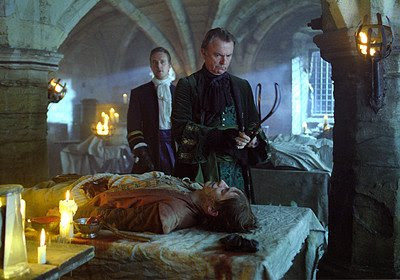 No, that’s not him on the slab.

As far as I know there are no plans for a second season. I understand there’s some debate over whether Crusoe is a cancelled show or a completed miniseries.

Miniseries is what they told me when I came on board. My brief was to deliver an arc with the satisfaction of closure, and no cliffhanger ending.

Knowing how the ground can shift in the course of production, I laid in a few strands that could serve as a starting-point for a further season. But an early network note was always to treat the show as self-contained and complete in its thirteen hours, and that’s how we went on.

One response to “The Return”