The Simpsons and Me

If you read my ‘back in LA‘ post a couple of weeks ago you’ll know that while walking in one of the city’s State Parks I was met by two Golden Retrievers, dripping wet and happy to share, closely followed by anxious family.

And if you read on into the comments section you’ll know that’s how I met Michael Price, Co-Executive Producer on The Simpsons.

Last Thursday found me back on the Fox lot, attending a Simpsons table read at Mike’s invitation.

Table reads are becoming less common in drama, but in comedy they’re a useful tool. The cast and production team sit around a big conference table and there are chairs around the outside of the room for about 30 invited guests who serve as a kind of tryout audience for the jokes. Immediately afterwards in the writers’ room, the writing staff dive onto the script like seagulls on fresh roadkill and make it funnier.

It was over in less than an hour and great fun, though a little strange because the voices were all Homer and Bart & co but the people were the people. Hank Azaria and Harry Shearer phoned their parts in – literally, because both were off making movies and participated by speakerphone.

Matt Groening was there, too. If I was Matt Groening, I’d be in the Bahamas having delegated all the heavy lifting to a horde of carefully-selected Oompah Loompahs. But the fact that he wasn’t is probably one of the reasons the show has lasted so long.

Bart signed my copy of the script. I wasn’t certain if I should ask, but Nancy Cartwright came working the room. I won’t give away anything about the story we heard, though it was cool to find out afterwards that my favourite joke was contributed by my host.

At least, that’s what he said when I told him.

And there’s a funny circularity about this whole thing that only struck me when it was over. One of the reasons I was so happy to see the Retrievers in the park was that our own is so far away, and anyone who’s used to walking with a dog can’t help finding a walk incomplete without one. It’s like going to the Mall without your pants.

(I can tell you, next time I’ll be sure and read the label on the cold medicine.)

The thing is, the dog I was missing used to be my dad’s dog. We inherited her. Her name is Maggie because he was a big Simpsons fan. 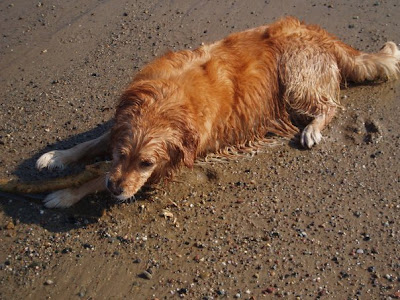 This being California, a temporary resident can rent a dog – though when you add up membership and rental and induction costs, it would be cheaper to buy a puppy and a gun.

4 responses to “The Simpsons and Me”