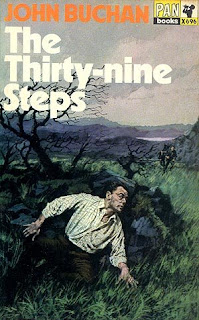 Back in July I posted some thoughts inspired by a re-reading of John Buchan’s The Thirty-nine Steps. If so inclined, you can find them here.

What I didn’t go on to explain was that my revisiting of the book had been part of a discussion between me and producer Archie Tait, whom I’ve known and spitballed ideas with ever since Chimera, with a view to getting a new production off the ground.

We couldn’t get anyone interested. The rights were due to expire but Castle Rock had been holding onto them for most of the last ten years, ostensibly as a directing project for Robert Towne. So we let it drop and moved on to another project, which is a horror story for another time.

Then blow me, along comes Christmas 2009 and a new BBC version of the story. Which I say without rancour; that’s just how it goes. I’m assuming that this signals the novel’s move into the public domain. My surprise is due to the flight of time, because I was thinking that the book rights still had at least a couple of years to run.

(Copyright in the Charles Bennett/Hitchcock screenplay is another matter, and one that complicates any thoughts of a new version. So much was added in that adaptation, and so many of the additions went on to become canonic, that to shed them is to lose the life-support system of the book’s lasting fame. But lose them you must, if you have the rights to one but not the other.)

The existence of this new version (which I haven’t yet seen and so can’t pass comment upon) frees me to tell you the rest of the story that followed on from those ruminations. Why? Well, I won’t be selling it now, will I? So I can offer it as a glimpse into the kind of process that begins when approaching an adaptation.

Here, going right back to the beginning, are those first thoughts on a move from page to screen as I expressed them to Archie.

Point one. I think you have a choice of two periods for this. You either stick to the period of the book or you modernise. In favour of period? Well, there’s the political situation of the time. There’s the fact that because of the nature of communications and everything else, the British landscape could offer us this great mythic backdrop to play out the drama. There’s the lovely narrative impedimenta of the age – the trains, the cars, the costumes. And there’s the simple fact that when you adapt a book, you should honour it and not plunder it, because if your inclination is to plunder it, you’re really just looking for a free ride when you can’t come up with a story of your own.

The advantage of going contemporary would be that you could rethink the whole thing into a smart, supercharged modern thriller. Richard Hannay is the great uncle of James Bond. I’d call him the grandfather, but I’m not sure that he’d know what to do with a woman. And THE 39 STEPS is the direct ancestor of the frills-free suspense narrative typified by THE FUGITIVE and 24.

Given that the Hitchcock/Charles Bennett version is always going to be considered as the definitive reading of the period story, an updating would free you to stand on your own feet. Sure, you could remake the Hitchcock for a new generation who won’t even look at a 1930s black and white movie. But who, with any regard for the original, could enter a remake with anything other than a gloomy feeling of humiliation? I’m sure that anyone who could would be exactly the wrong person to be entrusted with it.

Structurally, what would I do? I’d tidy up the opening. I would sweep away all the rubbish that Scudder tells him which he later finds out to be untrue when he decodes the notebook. I would preserve Buchan’s arc, but I wouldn’t preserve his plotting. I would look for the incidents and the narrative beats that he so blithely skips over. I’d work with more attention to character, particularly of the pursuing enemies, and I would look to create a role for the elusive Julia. Buchan doesn’t give us much about her, but he does give us maybe enough to justify her as an inside agent in the enemy’s camp, a kind of Maid Marian to Hannay’s Robin Hood.

There’s something not remotely convincing in Hannay’s response to being hunted being to pick on a point on a map which is as wild and unpopulated as he can possibly find. There’s all that stuff about Veldkraft, but it just won’t wash in the minds of the audience, because everybody knows that it’s easier to hide in a crowd than in an open field. Buchan gets Hannay up there because he wants him up there for the set pieces, not because a remorseless logic drives him. Therefore, we have to give him a reason to go up there and put himself at risk on the journey, and when he arrives he’s got to have something to be running to, not running from. My thought is that the visiting dignitary, Karolides or whoever, whose assassination is intended to spark the war, is perhaps heading for a conference on an estate up there. The laird of the estate is the one man whom Hannay thinks he can trust, having established that the rest of officialdom is riddled with spies and insiders. So he goes across Scotland to reach the man at the top to warn him, the only one whose integrity is beyond question, only to find in the presence of the man at the top that he has in fact walked into the lair of the leader of the bad guys. Which is not an entirely incredible scenario when one thinks back to those discussions that the Duke of Windsor was involved with, which would have put him on the throne of England in the event of a fascist victory in the Second World War.

That foiled, the enemy regroups and Hannay hurtles down to London, in the knowledge that, since they can’t kill Karolides at the conference on the estate, their Plan B is to get him however they can.

In this final act, Buchan has Hannay restored to official credibility, which to my mind ends the fun too early. The plot starts to freewheel just when it should be pedalling hard for the finish. My inclination would be to keep him on the run, perhaps with one Javert-like policeman who’s increasingly coming to believe in his innocence, and to realise the substance in his warnings. And I think it needs a final will he/won’t he showdown in which Hannay foils the assassin. The scene may not be there in the book, but I would consider it entirely justified simply because the book promises and then doesn’t deliver it.

We had other discussions and explored other versions, including a contemporary take with a set-piece chase across the moors in which Hannay’s plucky British Land Rover sees off a squad of Johnny Foreigner four-wheel drives, leaving them wrecked and overturned as he yomps his way to freedom.

Yeah, okay. I know. But it’s fiction, all right?