The Turn of the Tide 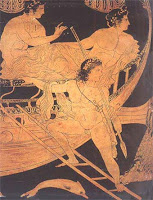 Looks like the high-definition format war is as good as over and that the next time I upgrade my Jason and the Argonauts, it’ll be to a Blu-Ray disc.

I mean, I haven’t got a Blu-Ray player or anything. I haven’t even got a hi-def TV. But at some point I will. I was an early adopter with digital, buying one of Sony’s first widescreen sets with an integrated digital receiver. Despite some early problems with the technology – to which Sony responded with exemplary customer service, I have to say – the damn set goes on and on and won’t die.

(Having said which, I’d still choose it over almost any hi-def TV that I’ve seen to date. The hi-def sets render more detail but I find their images crisp, crude, and unpleasant to look at. I quite like the look of plasma, especially for movies. But the LCD screens affect me like a singer whose technique is beyond criticism but who simply doesn’t make a likeable noise. And when a hi-def set displays your everyday TV broadcast signal… ech!)

So I’m in no rush anyway. On Deadline Hollywood Daily Nikki Finke reports that Wal-Mart and Netflix – giant retailer and world’s largest online movie rental service, respectively – are abandoning the HD-DVD format and going with Blu-Ray only from now on.

I could have predicted this. But only because Blu-Ray has the cooler and more memorable name. When you have no idea what the subtle differences in the technology may be, such things assume an absurd importance. I can see the lumpy-sounding HD-DVD struggling on a while longer, but essentially it’s rolling off down the belt that carried away Polaroid Super-8 self-processing cartridges and the Advanced Photo System.

Rita Rudner once said that she wasn’t going to buy a CD player until they promised that they wouldn’t invent anything else. But once you pass the into the digital realm, new technologies don’t necessarily make your old technology obsolete. Your CDs will rip to your MP3 player. Your DVDs will play on a Blu-Ray machine.

The disc and the case that you bought were an irrelevant part of the purchase; what your money paid for was the data. I never had much of a VHS collection, but I’ve got quite a number of DVDs. I give the cases away and file the discs in sleeves which allows me to keep my shelves free for books, as God intended. Trust me; DVD cases do not furnish a room.

When discs become obsolete I’ll no doubt upload the stuff I want to keep into whatever the new format will be, and keep everything in even less space.

Except for Jason and the Argonauts. That, I’ll have to buy again.

3 responses to “The Turn of the Tide”