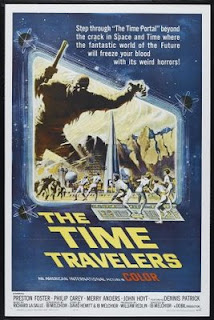 I’m seeing trailers for the new movie The Time Traveller’s Wife (as we’d spell it in the UK), and they’ve reminded me that a while back I did some thinking around the uses of time travel in fiction and on the screen. And what’s a blog for, if not to share?

The most obvious form is the ‘paradox romp’ like Back to the Future, where something in the past gets changed, and repairs have to be made to safeguard the present as we know it. There’s a ’70s Czech comedy called Tomorrow I shall Wake Up and Scald Myself with Tea that involves defeated Nazis trying to go back and give the H-bomb to Hitler. The Terminator is one of these, inverting the concept so that the aim is to prevent an unpleasant future rather than preserve the timeline. NBC’s Journeyman featured the same kind of action on a weekly basis, with Kevin McKidd going back to change individual lives for the better. Which is laudable but not half as much fun as killer robots. In Harlan Ellison’s Star Trek episode City on the Edge of Forever, Kirk has to watch Joan Collins get hit by a car knowing that if he saves her, Hitler gets atomic weapons (again).

After that comes the ‘story of ironic fulfilment’, where someone travels back in time and becomes an essential part of history, for example by unintentionally starting the Great Fire of London. An extreme case here would be Michael Moorcock’s Behold the Man, where the time traveller goes back to AD 28 hoping to meet the historical Jesus, only to end up taking on the role and being crucified. (In Garry Kilworth’s Let’s Go to Golgotha, time-tourists at the crucifixion are instructed not to change history and to join in the call for the release of Barrabas instead of Jesus; the protagonist realises that the baying crowd is comprised entirely of time tourists, and no-one from the actual era.)

Perhaps the most subtle riff on this theme is Chris Marker’s La Jetee, a French arthouse short told entirely in still images, in which a man is sent back from the future using his most powerful childhood memory as the means of focusing for his journey. The memory is that of seeing a man shot and killed at Orly airport moments after parting from his lover. Without realising it, he was witnessing his own death. The short was the basis for Terry Gilliam’s Twelve Monkeys. Often the most memorable thing about these tales is the resonance of their conclusions.

The simplest form of time travel narrative is the ‘fish out of water’ story where paradox and consequentiality don’t much matter, and the pleasure is in a) having a present-day protagonist experiencing a past or future landscape, or b) seeing someone from another era experiencing ours. Life on Mars and Somewhere in Time fall into this category but the granddaddy would probably be A Connecticut Yankee at the Court of King Arthur. Karl Alexander’s Time After Time has H G Wells pursuing Jack the Ripper through present-day San Francisco.

And there are time travel stories that don’t involve actual time travel but achieve man-out-of-time scenarios by other means. In the Sixties the BBC made Adam Adamant Lives! In which an Edwardian adventurer frozen in 1902 was thawed out in Sixties swinging London. While being dismayed by just about every modern advance he encountered, he was also a walking 60s style icon. It was cheaply and sometimes quite shabbily made (an hour of TV, rehearsed for a week and then shot in 2 hours of studio time), but could be tremendous fun. It inspired/was ripped off liberally by Austin Powers to an extent that’s probably nuked its chances of ever being revived or remade. In Richard Ben Sapir’s The Far Arena, a Roman gladiator is thawed out of a glacier and struggles to adapt to the modern world. It’s a long novel with a promising concept in which not very much happens. The focus is on the detailed procedure of discovery, revival and adjustment. Very short on mayhem. The TV series New Amsterdam had its main character travel in time by living for 400 years, as in Highlander.

Probably the most robust way of doing a weekly time travel series for TV is to have a big machine, a team, and an agenda. Or a fault in the machine that repeatedly drops the main cast into new and dangerous situations. Time Tunnel immediately springs to mind, where the two leads bounce around time like a pinball table, every week showing up on the eve of some well-known historical event, while the ‘control team’ anchored in the present day mostly watch helplessly and occasionally manage to supply a warning or some vital information. In the UK we have our own Doctor Who, where the hero makes random jumps through time and space and happens upon a local adventure wherever he shows up. Originally this was because his time machine was busted and he’s hopping around trying to get home. In his current incarnation he’s the ultimate tourist, so far from his home that his home’s no longer there. Doctor Who mixes sf and historical episodes; my memory from when I worked on it is that the historical episodes were fewest in number but always drew the higher ratings. Quantum Leap, slated for a remake, had an everyman hero, again with no control over where he’d show up next. Sliders involved parallel worlds rather than time travel but it was pretty much the same kind of thing.

I understand that the late Michael Crichton’s Timeline pretty much follows the machine/team/agenda model, although I haven’t read the book or seen the movie. In series terms I can’t help feeling that the Stargate franchise may have colonised the setup.

If the big machine isn’t broken, then the key lies in the agenda. Jack Finney’s Time and Again sends the hero back with a mystery to solve. But a weekly non-mythology series needs a weekly mystery. I’ve heard of – but never seen – a UPN show called Seven Days in which, after any national disaster, an agent is sent back in time (using Roswell technology) and has seven days to avert it. It’s a neat idea.

My own modest contribution to the genre is the short story My Repeater (F&SF, Jan 2001), set in a near-future where time travel is available to all but used only by an obsessive few who waste their entire lives returning to the same moment in repeated attempts to perfect it.

16 responses to “Travelling in Time”