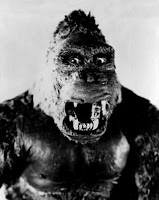 A sequence in one of the Disc One extras on the 2005 movie boxed set shows that Peter Jackson owns a copy of the Edgar Wallace material. It’s used as the prop for the script that Jack Driscoll writes on the voyage, and we get to hear a short sequence involving Captain Englehorn’s misgivings read aloud.

I can’t believe that the onion-skin paper being waved around and crumpled with such abandon represents the original physical pages, but it’s in proper screenplay form with character names as per the final movie. It’s titled Kong, echoing earlier Cooper films like Chang and Rango. Jackson’s cagy about how he got hold of it, though I’m not sure why he needs to be. Maybe it’s just too long a story to tell.

Here’s what I’ve found; for me the long movie plays much better split over a couple of evenings. Of course, what you then lose is the big-screen experience, which for a spectacle movie like this is significant.

(Maybe this is the answer…)

I’ll tell you what still throws me, though. In the 1933 original, Kong is an example of a lost prehistoric species. Ape-like, enormous, and sui generis. In the modern version he’s an authentic-but-bizarrely-magnified Silverback Gorilla, which is… I don’t know. It’s less, somehow. By which I think I mean it exerts less of a grip on my imagination.

The original Kong had two distinct looks, apparently, or three if you include the ‘life-sized’ constructed head used only in a couple of sore-thumb closeups and displayed at the premiere. Broadly speaking there was Skull Island Kong, and Manhattan Kong. There’s some interesting stuff about the construction of the models and their fate after the movie if you want to look here.

Or if you want to see something really dumb, there’s this piece. It sounds like it ought to come from The Onion but it’s actually a po-faced article from National Geographic: King Kong Island Home Is Pure Fantasy, Ecology Experts Say.