You Know the Score 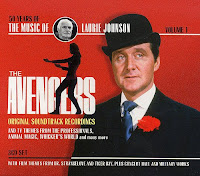 Lee Goldberg‘s comment on The Saint on TV has prompted me to plant another signpost to this underpriced gem, a 3-CD boxed set of Laurie Johnson tracks that includes over 70 minutes of Avengers cues including the full-length “mein liebe rose” track used to torment Mrs Peel in the episode The Joker. Although, I’d guess for some copyright reason, it’s minus the German vocal.

(As I’ve mentioned elsewhere, I’m tempted to have it played at my funeral. Imagine how it would creep everyone out!)

The other two discs in the set cover some of Johnson’s non-Avengers themes and other orchestral work. Some of this was eye-opening; credits geek though I am, I’d no idea that he’d contributed to the score of Doctor Strangelove.

Right now, the set is on offer from Amazon UK at £4.98. Less than five quid! Unbelievable. Buy one for yourself and one for someone else, and you’ll even get free delivery. The US price is higher, but Amazon dealers are offering it for a lot less.

A second 3-disc set expands the collection and includes a similar set of Johnson theme-and-cues from The Professionals, and doesn’t cost much more.

Btw, if you go to Lee’s blog, check out this rarity; a short test reel for an unnmade Batgirl show, featuring Adam West and Burt Ward and probably knocked out in half a day on an existing set to test the viability of the project.

6 responses to “You Know the Score”