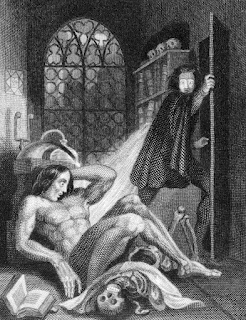 A couple of weeks ago I answered a few interview questions from novelist/academic researcher/teacher Brandy Schillace, and the results are now online. I spouted stuff like:

“Through my teens I read classic science fiction and ’60s British thriller writers. Then I had the advantage of a very solid three years of education in English Literature that opened up new avenues to me, from the medieval mindset to the poetry of Thomas Hardy. I think the point is that as a reader I had a big, big net, and a special fascination with popular fiction. I can remember buying Westerns and Romance novels, neither of which were of particular interest to me but I felt driven to find out what was going on in that kind of writing. I looked at William Goldman and Michael Crichton and saw that it was possible to be both a novelist and a screenwriter; Goldman kept the distinction clear and Crichton’s later, less substantial work showed what can happen when you don’t, so I learned from both of them.”

“Research is nothing more than expanded observation and as such, it’s key to all creation. Art’s about insight, and you can’t offer insight into nothing. Research is about continuing to write with authority after you’ve detected the limits of what you know.”

More dazzling autobiography and Secrets of the Universe here.

And while you’re visiting, dig around a little. Dr Schillace’s interest in the intersection of science, medicine and literature give her obsessions and researches an inevitably Gothic tint. Her published academic work covers areas of psychology, neurology, weird science and reproduction; here’s a podcast recorded in the Wellcome Collection’s club room, in which she discusses recent work on syphilis and Dracula, while if your imagination isn’t piqued by her search across Europe for the Labour Device, an eighteenth-century “mechanical phantom used in the teaching of male midwives”, then I don’t know what would do it.