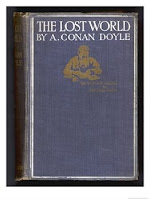 There’s no cover image yet for The Bedlam Detective, so here’s my first edition of The Lost World instead.

If it looks a little shabby that’s because it cost me less than thirty quid, and that from a dealer who specialised in Conan Doyle material and knew its worth. So I knew it wasn’t a steal, though I did think it a good bargain. The binding is tight and the pages are clean and all the photographic plates are present, even including the tipped-in sheet of tissue paper that was there to protect the frontispiece.

Ah, the frontispiece. Have a look at it; Doyle was having fun, here. The photograph purports to be ‘the members of the exploring party’ and this entire 1912 edition of the novel is presented as a spoof non-fiction published memoir, illustrated with sketches and photographs created or doctored for the occasion.

That bearded Professor Challenger figure seated behind the table – that’s Doyle himself. Edward Malone, seated in the foreground, is actually W H Ransford, the photographer responsible for the composite paste-up work which allows illustrator Patrick Forbes to appear as both Professor Summerlee and Lord John Roxton with a change of makeup. Legend has it that Doyle showed up on the doorstep of his brother-in-law, Raffles creator E W Hornung, in full disguise and posing as a thickly-accented German doctor, managing to keep the pretence going for some time until a less-than-amused Hornung saw through the deception.

It’s this element of mischief, Doyle’s knowing blurring of the line between fantasy and reality, that connects The Lost World to The Bedlam Detective.

Everyone has books that are special to them and The Lost World is one of mine. The one above all others, probably. When I was invited to submit a story to David Pirie’s Murder Rooms series, I saw an opportunity to riff on a favourite novel’s themes and elements while playing with the fantastic train set that is BBC period drama. Murder Rooms featured the young Arthur Conan Doyle and his relationship with his mentor, Joseph Bell; theirs was a prototype of the Watson-and-Holmes partnership, and here was a way of refreshing the spirit of the stories without having to go over some well-trodden ground. It starred the late Ian Richardson and the equally excellent Charles Edwards, soon to be seen as Michael Palin in Holy Flying Circus.

My episode opened with Doyle at a lantern-slide lecture given by the famous Victorian explorer Everard Im Thurn. Im Thurn was one of the first Europeans to reach the remote plateau of Roraima in Venezuela, model for Doyle’s lost world. While the main story goes on to concern itself with a planned Fenian outrage in the heart of London, woven in with it are a collector of dinosaur bones, a fickle young woman named Gladys, a short-tempered former teacher of Doyle’s (William Rutherford, played by John Sessions) who would inspire the character of Professor Challenger, and a travelling circus whose elephants moving through English woodland provide a groggy Doyle with a momentary and memorable epiphany.

Fast-forward about five or six years. A conversation with editor and SF historian Mike Ashley set me looking at the subject from another angle. I pictured a real-life man like the novel’s Challenger years later, isolated, his memoir exposed as a fraud, his reputation in tatters, a man still clinging to the belief that all of his troubles can be traced back to a time when he saw monsters; and at that point I let go of The Lost World, and launched into the story of guilt, inner conflict, madness and memory that would stand separate and alone as The Bedlam Detective.

I have five different editions of The Lost World… a well-handled first, the Pilot and Rodin annotated edition, a ’30s Hodder & Stoughton hardcover, a children’s paperback, and the Professor Challenger Omnibus in which I first read the tale. If only the text mattered, then any one of those would do. Or I could junk them all and download the words from Gutenberg. But each of them carries a different charge, of association and of the era when it was published. Each one is a different performance of the text.

Well, since writing that I’ve acquired a couple more… the two bound volumes of The Strand magazine from early in 1912 containing the story in its original serial form, and issues of The Eagle from 1962 in an adaptation by Richard Jennings with art by Martin Aitchison (see the panel above, and click on it for a larger version).

I was in touch with Martin earlier this year, and he wrote of how much he’d enjoyed the job; adapting the tale again for Ladybird Books a few years later, he’d shown the Eagle artwork to his new editor who’d opted, in the end, to provide younger readers with a take that was just a little less exciting. 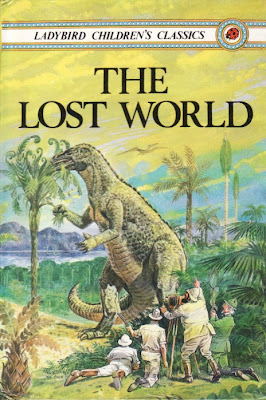 One response to “My Lost Worlds”