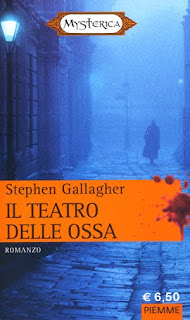 New book coming. If you were waiting, sorry to have made you wait so long. Issues mostly beyond my control.

(This isn’t it, by the way. This is the Italian paperback of The Kingdom of Bones, which just came in.)

The Bedlam Detective picks up Sebastian Becker’s story in 1912, one year after the conclusion of The Kingdom of Bones. When Kingdom ended, he’d brought his family back to London in fulfilment of a long-standing promise to his American wife. Now he’s working as the Special Investigator to the Lord Chancellor’s Visitor in Lunacy, sent out to uncover criminal insanity amongst those who have the wealth and position to conceal it.

I’ve a date for early 2012 publication but it’s not set in stone yet, so I’ll not get too specific until it’s confirmed. Ditto with the cover, of which I’ve seen a rough.

This is the novel that I’d originally titled The Suicide Hour, but once it was in proof my editors at Crown suggested a change to something that sounded more more like the book I’d written, and less like a memoir of despair. Before you leap in and argue on my behalf, let me say that I didn’t take much pushing to agree. The new title’s all mine, too.

It’s a murder mystery, with locations ranging from Southwark to the Americas. Becker is sent to the West Country to establish the mental state of Sir Owain Lancaster, a discredited industrialist under the control of a personal physician. Following the deaths of two children on Lancaster’s land, Becker unravels the secrets of a disastrous expedition that destroyed the man’s reputation and possibly his sanity.

I didn’t intend it as a sequel, or ever see Becker as a series character – in fact Howard Morhaim, my agent, had to persuade me not to kill him in one of the early drafts of Kingdom – but I’m deep into a third Becker story now, with an idea lined up for a fourth.

If it isn’t a series then I’m not sure what to call it – a sequence or a cycle, maybe, following a character through his life and seeing him significantly changed as he goes. Don’t get me wrong, I love series characters. They’re just at odds with what I try to do in a book.

Just as a track car is stripped of many of the features required for the road, series characters are built for distance and consistency. They collect just enough baggage to maintain the illusion of life, but never enough to slow them down. At the extreme end you get those private eyes who live lives of brutal solitude, yet have an endless supply of Old Friends who show up on their doorsteps in need of help.

I’m fine with that. It’s just not what I do.

UPDATE: Amazon.com already has The Bedlam Detective listed with a US release date of February 7th. No image as yet.

As to why the US, see my previous post on the subject.

radio, The Bedlam Detective, The Kingdom of Bones, The Suicide Hour