An Award! An Award!

It doesn’t happen often, so what the hell, let’s shout. I’ll write a proper update on the event tomorrow (ish – it’s very late and we’ve been hitting the bright lights and low dives of Lisbon) but for now, from the press release:

LEGACY follows the uncovering of a major 60s nuclear accident through a forensics team’s piecing together of clues from its present-day aftermath. CRUSOE showrunner Stephen Gallagher has a track record as a creator of science-themed popular drama, from 90s  bioshocker CHIMERA to CBS/Bruckheimer’s ELEVENTH HOUR. Gallagher is represented by Julia Kreitman at The Agency and Josh Hornstock at UTA.

The 2013 European Science TV and New Media Festival is organised by EuroPAWS and Euroscience with the support of BASF, Janssen, the La Caixa Foundation, and NEF: The Innovation Institute and Science Foundation Ireland. 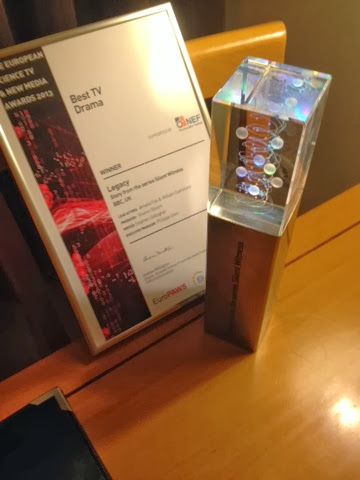