I’ve begun watching a WGA preview screener of Amazon’s Homecoming with Sam (Mr Robot) Esmail directing Julia Roberts in a podcast-inspired drama. It’s too early for me to offer judgment, but so far it’s intriguing and engaging and matches no obvious broadcast model – half-hour serial fiction with varying episode lengths and other “No one ever does that” elements that I’ll leave you to discover.

Right now it seems like no more than a week or two goes by without some form-breaking novelty from one of the streaming platforms. A lot of shows that do nothing for me, but a significant number that do. 3 years ago I was working for a US network whose drama VP told me that the traditional networks were expecting to survive no more than 6 years in their current form. I get it now.

This item in The Guardian’s media section brought that conversation back to mind: 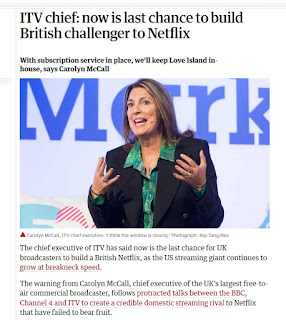 The big game-changer was Beau Willimon and David Fincher’s House of Cards, I reckon. Prior to that, online drama meant no-budget, no-name exercises in the disguising of negligible resources. HoC landed among the webisodes like Orson Welles in a paddling pool.

The success of Netflix et al is that of providing for a wide variety of tastes. In the arc of my career I’ve seen UK broadcasting go from ‘something for everyone’ to the steady narrowing of focus onto one or other imaginary demographic. Lost count of the number of times I’ve been told what “the ITV viewer” or “the BBC1 audience” wants (usually homely and heartwarming ‘people like us’ stories).

Nothing wrong with that. But it’s like beans for every meal.

I had a conspiracy theory that the BBC’s Bodyguard Radio Times cover spoiler was a veiled rebuke to the on-demand viewer. But I do hope our national broadcasters survive and prosper, without being reduced to a diet of sports and shiny-floor shows with live voting..

By the sound of it, they’ve got 3 more years to work out how.