Down by the British Museum in Bloomsbury runs Montague Street, a terrace of Georgian townhouses of the classic Upstairs/Downstairs kind. They’re now mostly brass-plate offices and boutique hotels, and I can never walk along it without thinking of Charlie Grant. 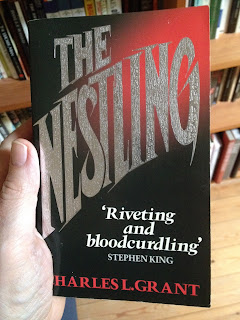 Charles L to the literary world, Charlie to just about everyone who knew him. The Montague Street connection is tenuous – he and Kathryn stayed in one of those hotels after a British Fantasycon where Charlie was toastmaster, having been the previous year’s Guest of Honour. It’s just one of those details that evokes a host of other memories and (see what I’m doing here?) the evocative detail is what Charles L Grant, writer and anthologist, was all about.

The ’80s was a great time to be in horror. Already a genre with a strong tradition, in the 80s it was pretty much rampant. Writers such as Ira Levin, Thomas Tryon, and John Farris had already begun to break down the wall between genre and the mainstream, and then Stephen King drove a tank through the breach.

I count myself hugely lucky to have been finding my feet at just the right time. Two personal landmark events stand out in my memory; one being my first sale to The Magazine of Fantasy and Science Fiction, the other Charlie picking The Jigsaw Girl for Shadows 9. Publishers were mainly buying horror novels because they were making money. But if Charles L Grant bought your story, it was because he thought it was good.

Every field needs its controversies and ours was the Quiet Horror vs Splatterpunk debate. Unlike the Sad Puppies debacle it was an enriching and enjoyable hook for panel discussions, bar chats, fan writing… the question was basically over the relative merits of showing vs suggesting. Charles was widely acknowledged as Quiet Horror’s Grand Master, both in his own fiction and in the influential Shadows anthology series on which he was editor. King praised his eminence as a creator of ‘small-town horror’, the form that’s currently been so effectively mined and celebrated in Netflix’s Stranger Things.

Many of those that I count among my ‘cohort’ have remained friends to this day. I only wish that Charlie, who left us on this day ten years ago, were still here among them.