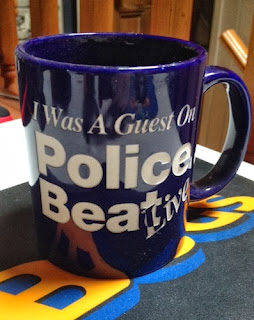 And sometimes, even when you do ask…

When I was starting out, planning a novel that would be called Chimera, I approached the Cumbrian Police to ask for some help in researching how they’d respond to a major incident in their area. Their response was polite, brief, and negative.

But just a couple of years later, gathering detail in the US for the novel that I’d abandon and then revive as Valley of Lights, I had a very different experience. Within hours of contacting the Phoenix PD I was out in a car with Tom Kosen, one of their sergeants. When his shift ended, I transferred to another. I watched the police at work, I listened to their jargon, I got shown all the trouble spots and the favourite places. From our conversations I made notes on their shift patterns, their career arcs, their education, their attitudes. I scribbled down the language and the speech rhythms of the people they dealt with.

Nobody put on an act for me; citizen ride-alongs were available to all, and this was routine for them.  I started to build an insight into the state’s complex layers of law enforcement… where police responsibility began and ended and where the Department of Public Safety took over, how the local law worked outside the city, where the FBI came in.

And what I did with the police I also did with the DPS, otherwise known as the Highway Patrol, and then again with the local FBI office. It was a boy’s dream. I got a call from the motel at about three in the morning to ask what had happened to me; I’d been riding for about eighteen straight hours and had lost all track of the time. I filled one notebook after another.

You don’t feel glamorous when you’re tagging along. You’re a geek who knows nothing while they’re totally at ease on their territory. What I felt from with them was a kind of amused tolerance, entirely friendly.

I’ve found individual British police officers to be just as co-operative on an individual basis… it’s the institutions that can  be radically different. In the States you contact the Public Affairs office or whatever, and the reception you get is both cordial and willing. They pass you down the chain to whomever you need to see, and tell you to get back to them if there’s anything else you need. In Charlotte, North Carolina, the local film commission made a couple of calls and within hours I was paired with one of their detectives. That was for The Spirit Box, a favourite among my novels. Find it if you can.

I got exactly the same response from the police in both Dusseldorf and Hamburg when I was researching Nightmare, with Angel. “Come in, you’re welcome, what do you want to see?”

But in the UK, it’s like the safe answer from the higher-ups has always been ‘No’. Unless you’re the BBC or some major company, and then they’ll deal with you because it’s harder not to. They know that the project’s likely to get made with or without them, and it’s better for them to have some input.

But that’s when you’re backed by a big organisation. If you’re a lone writer researching police affairs over here you have to use contacts and seek out individual officers. My experience has been that they’re usually happy to speak privately.

I’ve had some great contacts in my time. The officer who advised me on Down River was a senior detective in the Serious Crime Support Unit. For Rain it was the youth liaison officer in Soho’s Vine Street station. My advisor on The Painted Bride was an ex-Detective Superintendent who’d been advising on a BBC show, and so I hired him for a set period at the same hourly rate. We met in pubs and I paid him in cash in a brown envelope. Fantastic.

They all leave me in the end. They retire and go off to live in Spain. I imagine them socialising and swapping stories with all the villains they used to nick.