It was my first visit to the JBTV offices in Santa Monica. I was meeting with the members of Jerry Bruckheimer’s (surprisingly compact) TV team in the office of Executive Producer Jonathan Littman.

Amongst the DVDs on the shelf by his desk, I noticed a boxed set of Danger Man (retitled Secret Agent for US broadcast). A British action drama from the ’60s, a black and white echo from my childhood… when I remarked on it, Jonathan glanced back. “The perfect show,” he said. Which was some praise.

A couple of years later I was looking into remake rights for Man in a Suitcase. This was a later ITC show whose premise – disgraced-but-innocent CIA man scratching a living in London – had struck me as having coproduction potential. In an unexpected development, while picking my way through the who-owns-what jungle I was invited to pitch a reboot of Danger Man.

It didn’t take long for me to see that this was never going to happen. You get a vibe as to whether the person with the proposal has the clout to carry it through. But in the meantime I’d revisited the show and sorted out my thinking.

A few days ago I came across the file while doing a little hard drive housekeeping. Rather than waste the words, I decided to share. 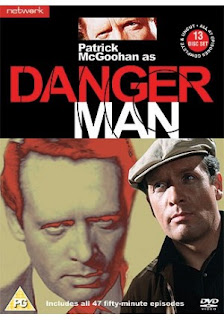 This is the show that Jonathan Littman described as the most perfect of series concepts, and I’m sure he’s right. It doesn’t matter how many spy shows have come along since, Danger Man was a design you can’t improve upon. You can only imitate and vary.

The secret of its success lies in the minimalist strokes that make up its format and the very precise, and almost understated, nature of the main character.

John Drake is complex without being complicated. You get him very easily. He’s a moral man doing dirty work, and internalising the resulting conflict. It’s a price that he pays. His adventures are straight out of Ian Fleming but his soul is by Graham Greene.

There’s no attempt to resolve this inner conflict, and Drake has no safety valve. He never complains, shares, or unloads. Apart from the occasional vent at his superiors (which never gets him anywhere), he stays tightly wrapped. This is one of the keys to his character; it explains how a fundamentally non-violent man can more than hold his own in a violent situation. He displays a watchful stillness, but you never feel that he’s calm – it’s the stillness of a hard steel exterior with contents under pressure. So when violence is required, he just lets some of the anger out. It’s available in an instant and he shuts it down just as quickly.

He will do his best to see that the innocent don’t get hurt in the course of an operation, though his is a world in which innocents often suffer. The greater consequences can only be worse if he doesn’t complete his mission, but many Danger Man stories involve Drake disobeying orders, devising a strategy of his own to achieve an objective by means less damaging to those he meets and sometimes uses.

Like Bond, he’s a competent hero in a hostile universe. But even after all these years we still don’t know what values Bond stands for. John Drake, however, reminds us what it is to be humane. In a dirty war, he stands for the moral difference between the good guys and the bad guys. He’s the opposite of Jack Bauer, who switches his conscience off when he feels the need to do harm. John Drake’s heroism requires him to carry the moral weight of his own actions at all times. His redemption lies in his willingness to be damned for the sake of others.

Just as Drake’s character is portrayed in a few clean strokes, so is his world. In fact, pretty much everything you need to know is thrown down in the Season One credit sequence.

It’s night. We see a floodlit renaissance dome composed together with a piece of brutalist office architecture, the traditional and the modern co-existing. From the building emerges a well-groomed guy in a suit, walking at a determined clip. The voiceover tells us his employer, his job description and his name. He doesn’t work for British intelligence; he works for NATO, an international and American-dominated organisation. He’s a troubleshooter. At that point he hops into a convertible and he’s gone.

Nine times out of ten the next we see is that he’s somewhere else in the world, dressed-down and pretending to be someone he isn’t. But we never lose sight of the authentic John Drake in a scenario. We’re always aware of the degree to which he’s acting, watching those around him, and recalibrating his plans. 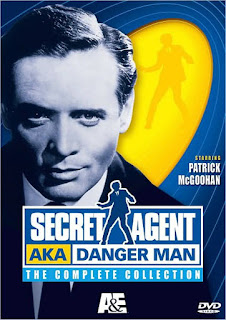 Drake has a boss in London, but we don’t see him often. When we do, the two of them are usually arguing. Drake is a man who can be relied upon to get the job done but not to do as he’s told, which is the kind of thing every boss hates. In these scenes you can see the seeds of The Prisoner further down the line.

As well as the London office (fronted by a company named World Travel), Drake has a London home. It’s a mews house, very 1960s, very trendy, but with a nod to the ‘clubland heroes’ of the ’30s. John Steed lived in a mews, as did The Saint. It’s bachelor-sized accommodation, fashionably modern, architecturally traditional. But this London underpinning is quite minimal. Most of Drake’s adventures are in studio recreations of faraway places.

All of that, I would suggest, can be brought forward to the modern day with a very light hand. Drake’s character calls for little interference beyond fidelity to the concept and good casting. Start with Damian Lewis and work your way down.

Drake needs to be classless but classy, a Brit for whom a well-cut suit is natural wear and not an affectation, and who can switch on the accent to become any of the American characters that he’ll play when undercover. Because although John Drake’s roots were deep in British spy tradition, Danger Man the show calls for American style and pacing. That’s what Lew Grade and Ralph Smart aimed for with the original. What we’d be doing is picking it up from the Elstree backlot and placing it in the home it always dreamed of.

Drake remains a British citizen, troubleshooting global security matters and getting his orders via the London office of an international organization. Which could still be NATO, which since 9/11 has (in reality) expanded its membership and operates a ‘whoever attacks one of us, attacks all’ policy. While he reports to London and occasionally touches base there, that’s not a big part of the show. My perception is that for the network audience, a UK element would add spice to the mix (see the Season 4 opener of Bones) but too much would work against us. So we mostly see Drake working with American agencies or, when alone, with American citizens or interests. I think that one of the reasons why audiences failed to warm to The Philanthropist was that the overseas settings made them feel too remote from familiar culture. When the network audience travels, they want to feel at home when they get there.

In shows like Alias and Heroes we’re far more adept at recreating exotic places on the backlot than we used to be. But I’d say the first production move would be a block of shooting on the streets of modern London with our lead and his basic wardrobe, to build up a library of establishing and linking material for use in future episodes.

In our pilot I would introduce Drake undercover as an American, then have him drop back to his British accent (to the surprise of other characters) in those moments when he’s not pretending to be someone else.

The one big element that we no longer have access to is the Cold War. Or do we? We’ve got Putin in power, and we’ve just seen a major spy swap, so maybe it’s not quite the outdated trope that we all imagined.

What we do have is a world where silent espionage has been replaced by the threat of public violence. Now, one of the things about the original Danger Man was its comparatively realist tendencies. Its villains didn’t live in volcanoes. Drake did not single-handedly avert threats that we know would be dealt with by entire organisations. But what we have is a fragmentation of the world into factions with their own specific grievances, their own specific networks, and their own particular objectives. We have diplomatic crises where things go wrong and require quiet repair. We have high public figures who misbehave, and those who would seek to exploit their resulting vulnerability. There will always be stuff that needs quietly sorting out.

Well, that was it. I didn’t get very far with Man in a Suitcase, either. As with Danger Man, whether that reboot could succeed without its magnetic, famously difficult leading man (Richard Bradford) remains to be seen.

You can find my earlier post and thoughts on Man in a Suitcase here.