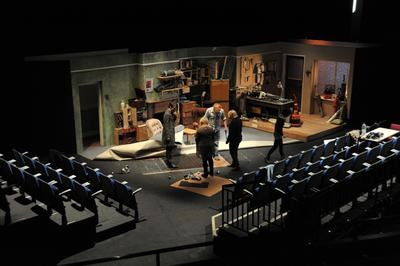 Sad to hear that Donald Roy, founding head of Hull University’s Drama Department, has died in Brighton at the age of 90. I was a Drama and English joint honours student in the mid-70s and  so many of the good things in my own life can be tracked back to that special time with that exceptional bunch of people.

Don excelled at marshalling a lineup of uniquely quirky but highly able people for his teaching staff, who between them fostered a we-can-do-anything atmosphere. When the department started, it was just Don on his own; it was only the third Drama Department of its kind in the country, but under his guidance it became the first to have its own fully-equipped teaching theatre and TV studio in The Gulbenkian Centre.

After his retirement the performance space was renamed The Donald Roy Theatre. The TV studio would later be revamped and named The Anthony Minghella Studio, for the late writer-director (and my fellow cast member in Don Roy’s translation of Romain Weingarten’s Akara; I was in drag as a French woman whose son was a dog, Tony was a frog who played the piano. Theatre of the Absurd. What can I say?)

The drama course was terrific, a deep dive into human history seen through the lens of performance and exploring its inextricable links with mythology, religion and social change. On top of that, the practical craft of production and the actual business behind show business. And on top of that, the very thing that people seem to think that drama students do to the exclusion of all else – a weekly session of fannying around in leotard and tights. The purpose of this, I now realise, was never to make us into actors. It was to give us an understanding of what performers do.

Which is not to say that the department didn’t turn out its share of talent. When I tried to image-search for a photo of Don the screen filled with headshots of actors whose CVs all include early roles in the Donald Roy Theatre – quite the testament in itself.

So instead of Don’s headshot, pictured is the performance space that bears his name.
UPDATE: With great thanks to Francesca Roy I can now add this image, said to be from an occasion when Don was presenting an honorary degree to Harold Pinter… 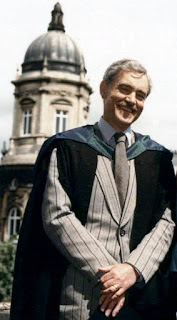