Before Christmas I bought a new Smart TV and only then discovered, as you do, that while the internet sees agreement on almost nothing, it’s united in the opinion that the wifi on Samsung Smart TVs is pants.

So I finally got around to creating a wired network using the house mains. Last night I investigated some of the free programming out there, most of which is terrible but wow, there’s so much of it… YouTube alone is an indiscriminate and infinite warehouse of curiosities, not just the usual clips and memes but entire shows and movies from yesteryear, some legit, some questionable. Among them was, uploaded in its entirety, the 1969 Chicago-shot movie based on Keith Laumer’s novel The Monitors. I’ll venture to say it was not great. I didn’t watch it all, but I find that a meal rarely gets better after a first bad mouthful.

The evening’s unexpected discovery was Algernon ni Hanataba wo, a 10-part Japanese serial based on Flowers for Algernon. It felt like a challenge but I did watch the entire first episode, more out of curiosity than anything else, and found myself being won over by its eccentric charm (I’d had wine).

If you don’t know the short story by Daniel Keyes, seek it out. You won’t be sorry. 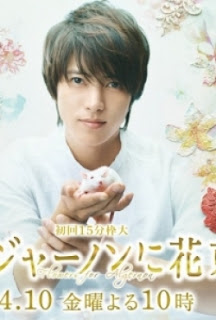 The Charlie Gordon figure is called Sakuto and is played by former boy band star Tomohisa Yamashita. The character set and situations have been massively expanded, obviously, but allowing for cultural shift and different approaches to style it seems to be honouring the spirit of the original. Simpleminded Sakuto works for a floral delivery company which employs young ex-offenders. For him they’re a surrogate family, their banter more that of brothers than the edgier mockery of the source story. The first hour is spent mostly in his world, counterpointed with the lives of the staff at the lab whose director is angling to seek a human subject to take the Algernon experiment to the next level. There’s knockabout comedy, romantic misunderstandings, flashbacks to Sakuto’s childhood rejection by his disappointed mother. It’s beautifully shot and is often overwhelmed by excessively sentimental music.

Will it sustain for an entire series? I doubt that I’ll go the full course but the core of Keyes’ idea, the innocent who grows into awareness only to foresee his own decline, is a robust one. I can imagine it developing along the lines of Limitless, perhaps. But if you’d asked me which well-known short story might generate 10 hours of Japanese TV, this wouldn’t have been the first to spring to mind.