It’s now more than two weeks since my return from the all-vaxxed, all-masked 32nd Gallifrey One, the big annual Doctor Who convention in Los Angeles. They had to skip last year because of Covid and capped this year’s attendance at 2,600 to reduced crowding. After two transatlantic flights and a weekend spent mingling with more people than I’ve been close to in the past 2 years, I’m still testing negative. The Con itself was one of the most enjoyable I’ve attended, down mainly to the calm efficiency of the organisation and the relentless good spirits of the attendees. 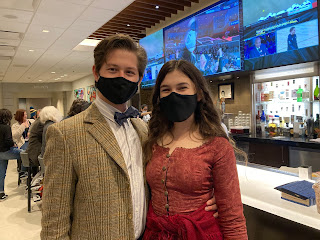 There were no noticeable problems over mask compliance and the requirement for proof of vaccination or infection-and-recovery meant that dropping the masks for food and drink felt like a low-risk move, allowing for sociable evenings in the bar. Guests onstage could choose whether to remove masks, which most of us did. Microphones and seats were wiped down between panels. There was no masquerade but cosplay was in evidence throughout. I lost count of the Jodie Whittakers (of all ages) but it was the three identical David Tennants that messed with my head. 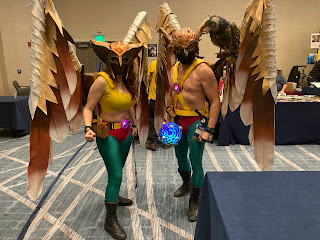 The general endorsement of the measures has to be qualified by the fact that those with objections stayed away, while the organisers could point to city ordinances to back up Convention rules. Despite that I understand that they took some online abuse. No one present considered this a ‘new normal’, but a transitional stage on the way back to it. Last year I was writer GoH at the all-online World Fantasy Convention, where the move online was one of the first, bold steps in keeping the flame alight. We didn’t kid ourselves that we could replicate the presence and conviviality of the live event, but the Con committee pulled off a remarkable feat. 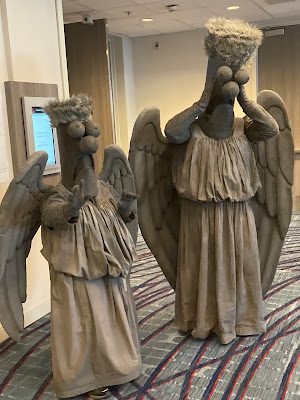 I will say that Zoom’s brought a permanent new element into fandom. My local SF group, well into its fourth decade, moved entirely online in the first weeks of lockdown and we’ve been meeting virtually twice a week ever since. The big advantage; several of those who’ve moved away (and in a couple of cases left the country) get to join in again. When we go back to something more approaching normal we plan to have one live pub meet and one online, to keep everyone onboard.