I’m reposting this from October 2009.

The night before my birthday, I had an idea for a way to mark it.

I’m spending a lot of time on my own here in Los Angeles, but it was no big deal being alone on my birthday. It’s not like I’m twelve or anything.

But… one of the routes from my place to the studio takes me past George Barris‘s custom car workshop on Riverside.

The name should be familiar – he’s the Batmobile guy. I’ve seen at least one of the fibreglass replicas that he built – it’s in the Cars of the Stars museum in Keswick, Cumbria — but the so-called ‘number one Batmobile’, the movie prop vehicle adapted from the Lincoln Futura concept car, is the one that was actually used in the 1966 TV show. And I’d heard that he keeps it there.

So I stopped by. I had to go through the yard to find the door to the office. There was a guy behind a desk. I introduced myself and asked if it was possible to see the Batmobile.

He explained that it was a private office, but I was welcome to take look around as long as I didn’t touch anything. Three steps and there it was! Not only the #1 but, through a doorway in an inner workshop, one of the five replicas as well.

I was the only person in the place! No ropes, no barriers, nothing. A woman passed through and asked politely if I’d spoken to anyone, ie whether I’d just snuck in or if anyone knew I was there; I said I’d asked permission from the gentleman near the door, and she said, “Oh, that’s Mister Barris.”

I walked around and around and geeked for a solid fifteen minutes. I saw an ad for “Photo of the Batmobile, signed, $10” so I asked if they had any and we chatted for a while. Barris signed a picture to me with a ‘happy birthday’ and wouldn’t take the money.

I mean, it’s not like I’m twelve or anything. 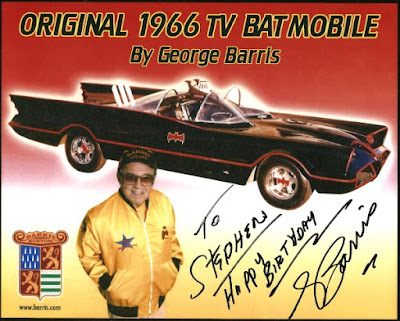