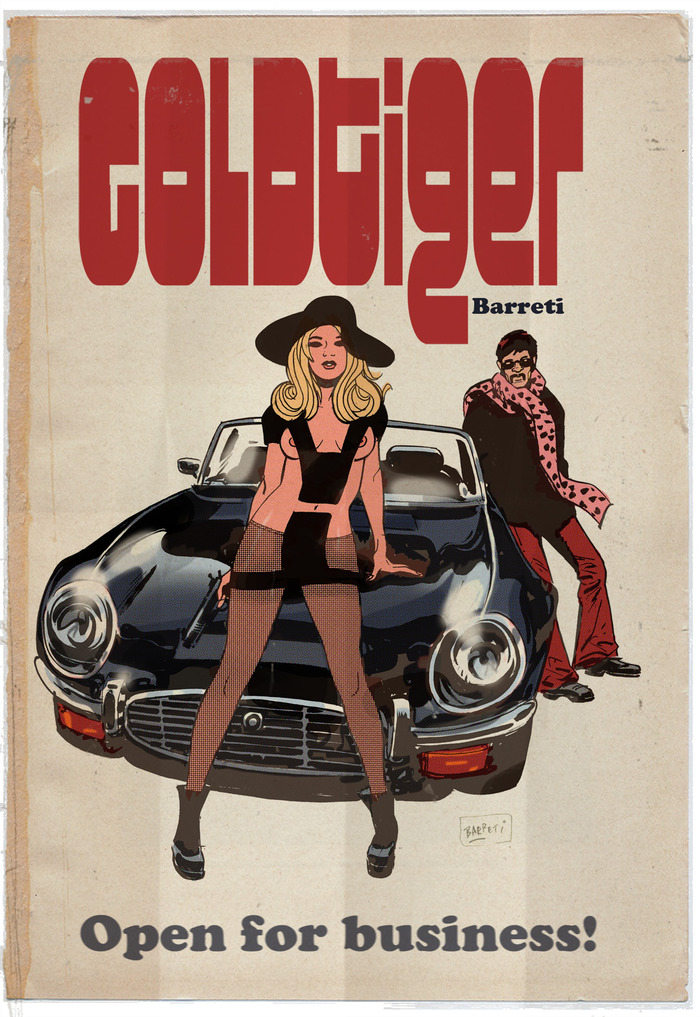 See this? You wouldn’t get away with it today, would you?

And yet, be honest… there’s something about that ‘sixties adventure-fantasy Dolce Vita that calls to us still. So what, if none of us actually looked or lived like that, or knew anyone who did? So what, if those who attempted to live the life for real mostly crashed and burned?

For the rest of us there was an alternate universe where Bond and Barbarella fought evil masterminds, where secret agents woke to find themselves in mysterious Villages, where a Modesty Blaise or Mrs Peel was a teenaged boy’s idea of a feminist icon.

Real life in the ‘sixties could still be a bit crap, to be honest, but it was a decade in which our fantasies soared. The exotic and the ironic didn’t cancel each other out, but coexisted to make popular art in a way we often struggle to emulate now.

So let me draw your attention to Goldtiger, a Kickstarter project from writer Guy Adams and artist Jimmy Broxton. At first glance it’s a classic European-style three-panel newspaper strip, collected and presented in the manner of those gorgeous bande desinee albums that you fantasise about collecting, if only your French was a bit better.

In actuality it’s a pitch-perfect recreation of the style and tone of the era, done with love and a contemporary perspective. It’s a 360 degree act of the imagination; they’ve even created the creators and their backstories. Check out the Kickstarter page and see if the project appeals to you as much as it does to me. There’s no gambling on whether they can pull it off; what they’re funding is the physical production, with the imaginative element already fully-formed.

I’m reminded of nothing less than Matthew Holness’s brilliant creation Bob Shuter, aka The Reprisalizer, 70s anti-hero and suburban vigilante, about whom I wrote here.