The British paperback edition of The Kingdom of Bones, the novel that introduces The Bedlam Detective‘s Sebastian Becker, is published today by Ebury Press.

THE KINGDOM OF BONES… shows the occult mystery in its best light. Vividly set in England and America during the booming industrial era of the late 19th and early 20th centuries, this stylish thriller conjures a perfect demon to symbolize the age and its appetites, an entity that inhabits characters eager to barter their souls for fame and fortune. When met, this demon is residing in Edmund Whitlock, an actor whose life gives us entry into the colorful world of traveling theatricals. When Whitlock passes on his curse to the company soubrette, the troupe manager follows her to America, intent on rescuing her, and runs afoul of the law. Although Gallagher delivers horror with a grand melodramatic flourish, his storytelling skills are more subtly displayed in scenes of the provincial theaters, gentlemen’s sporting clubs and amusement parks where a now-vanished society once took its rough pleasures.

And this from crime titan Ed Gorman:

“I read Stephen Gallagher for two reasons. First because he’s one of the most entertaining writers I’ve ever read. And second because I can’t read a short story of his let alone a novel without picking up a few pointers about writing. He’s an elegant stylist, a shrewd psychologist and a powerful storyteller with enormous range and depth. 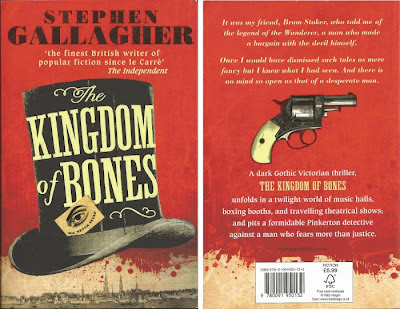