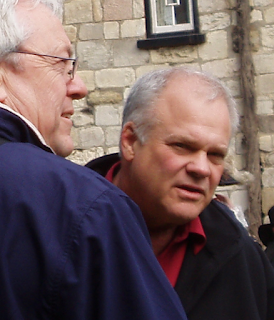 The entertainment industry’s a sociable business, but mostly you’re working in an ever-changing team that reconfigures with every project. It’s always great to see the good people again, and you can try to avoid the not-so-good people the next time around.

But meeting someone professionally and quickly getting the sense that here’s a friend for life – well, that’s not so common.

Jeff Hayes, who died on March 8th, was already in place on Crusoe when I came on board. It was a show made by a British production company for NBC, and they’d needed to bring in a producer with the experience to handle an international drama to the requirements of an American network. Jeff had done it all, from VP of Paramount’s network TV division (where he’d overseen the development of Star Trek: TNG) to building a production operation on Australia’s Gold Coast as President of Village Roadshow Pictures TV. He was Hollywood born and bred – his father was a talent manager and his mother an in-demand actress, and – as he told my Disney-freak daughter – as a toddler he’d been there on Disneyland’s opening day.

But far from being the corporate type, Jeff liked making stuff. It wasn’t about money, power, or status; “in it for the joy” is the phrase we used. He was my first American producer and the way we worked together changed my outlook for ever.

Crusoe faced some problems when I got there. A Canadian director/writer team had turned in their take and it didn’t match the swashbuckling brief that had secured the network’s involvement. Time was ticking away and they had no show to go with the title they’d sold. I thought I was pitching the London office for an episode assignment when I asked what the showrunner’s angle might be; instead I was invited to offer one. A couple of weeks later I was on the phone with Jeff, planning a production strategy for a show that hadn’t been written yet.

Here’s what it took me a while to get my head around. My position in the team was not what I’d been used to. My screenwriter relationships up to that point had largely been that of supplier and client. To Jeff I was the story guy he was making the show with, and now I was here we could get on with the job.

The series pitch to NBC specified flashbacks to Crusoe’s life in England. We’d yet to engage any episode writers, so I proposed writing those scenes in a block so we could get them shot while everything else was being firmed up. With Jeff I met no question over whether I could deliver; it was my responsibility and it left him free to focus on other things. 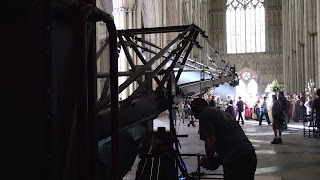 We spent a week of scouting in and around York along with production designer Jonathan Lee and line producer Andrew Warren. Each evening in the bar of the Station Hotel I’d describe the scenes I could picture for the locations we’d seen that day. At the end of the week, Jeff went off to prep them and I went off to write them. In what seemed like no time at all we were back, taking over the Shambles and clearing out York Minster for our enormous camera crane. Jeff was everywhere, quietly, pleasantly, firmly making it all happen. When we’d wrapped on that, he and partner Lisa went to set up a production base in South Africa and I set about writing the pilot.

Jeff spoiled me for life, I admit it. It’s a collaborative medium but so often the collaboration’s heavily weighted to one side. Now when I talk to screenwriting students I urge them to think, not as writers, but as showmakers.

We communicated constantly throughout the shoot, building as we went. As the end approached, the money was running out and Jeff reckoned he’d run through just about all of the local guest talent. We hatched a plan using our principal cast and burning the sets, and that two-part season finale is one of the pieces of TV that makes me most proud.

We stayed in touch after, met up when we could, always keeping alive the idea of working together again, making new plans as recently as February. When the bad news came my daughter wrote on Twitter: Jeff was one of the warmest and friendliest people I’ve met in this industry, with absolutely brilliant anecdotes for all occasions – he will be greatly missed.

And I can’t really add anything to that.