Kicking Off The Sixties 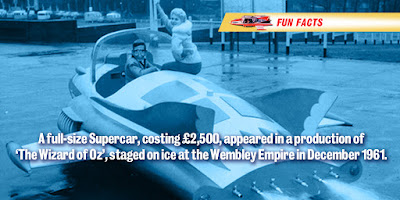 This posting from Network’s Twitter feed didn’t so much trigger a memory as confirm one. Somewhere in the back of my mind lurks the vivid image of a life-sized Supercar, complete with life-sized test pilot Mike Mercury, revealed at the centre of the revolve in the end credits of Sunday Night at the London Palladium. It’s been in my head pretty much for ever.

Ok, some unpacking needed here for those who might be gazing at those words and wondering WTF is he even saying. Chances are that you’ve heard of Supercar because it’s a part of the Gerry Anderson universe which, thanks to repeats and remakes but mainly by having made itself a permanent place in British culture, continues to have a life beyond the nostalgia market.

Supercar wasn’t the first Anderson show and these days may not be one of the best-known; being shot on monochrome stock and with a more juvenile angle, it hasn’t lent itself to revivals and reruns like brand leaders Thunderbirds and Captain Scarlet. But for me it was the one whose timing had the greatest impact. 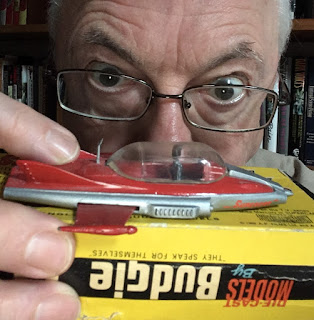 Blew my tiny mind, as I declared in an online response.

There was a cast of characters – a test pilot, a couple of scientists, a boy, a monkey, and a couple of idiot villains – but the car was the star; taking the futuristic features of the American gas guzzler and streamlining them into something with a genuine aesthetic, it was the ultimate go-anywhere, do-anything toy.

(Though the boy was voiced by Sylvia Anderson, there was no regular female cast member. There’s a dissertation waiting to be written on the evolution of female characters in children’s TV from sole tomboy gang member to bill-topping protagonist… unless someone’s already covered it, of course.)

This ultimate toy with its puppet cast featured in a series of half-hour action stories. The first season was mostly written by brothers Hugh and Martin Woodhouse, squeezing in the odd nugget of real science trivia wherever they could; for my money, nerd culture as we know it started right there. Martin Woodhouse also contributed episodes for the Patrick MacNee/Honor Blackman Avengers and wrote a series of highly readable science-and-espionage thrillers for the adult market; I tracked them all down as part of the background research for Eleventh Hour, and wished I’d discovered them earlier. 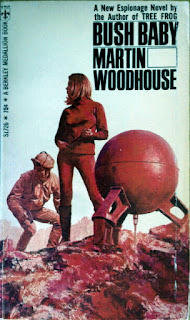 Sunday Night at the London Palladium was a Variety show broadcast live from the eponymous venue in the West End. The bill featured singers, comedians, jugglers, ‘speciality’ acts, a mini-gameshow, and a regular troupe of dancers called The Tiller Girls (“I know why they’re called The Tiller Girls,” quipped guest host Roger Moore one week in 1966, “because when I went by their dressing room I could see their rudders.”)

The theatre’s stage featured a large revolve. At the end of the show the curtain would rise to reveal all of the night’s performers in an outward-facing circle, waving from behind waist-high letters that spelled out the name of the show as they went around.

And on this one night – 25th February, 1962, according to the impeccable research of Andrew Pixley – the centrepiece of the tableau was Supercar, large as life. And my wee heart soared in a way that left a permanent track.

My life was on a course already, though I didn’t know it. Albert Camus wrote:

“A man’s work is nothing but this slow trek to rediscover, through the detours of art, those two or three great and simple images in whose presence his heart first opened”

Now, sometimes out of that you get a Mahler’s Second or a Botticelli Venus. With me it’s all the stuff you can see in the sidebar of this blog. Not quite the Resurrection Symphony, I’ll grant you, but it’s been a life spent in pursuit of authentic wonder with some unexpected connections along the way. Supercar episode director Alan Patillo was to be the editor on my Chimera miniseries. I got to conduct a Q&A with Gerry at the Manchester Festival of Fantastic Films – he’d brought along son Jamie, then not yet in his teens, now custodian of the Anderson legacy and a producer in his own right. Just a few weeks ago I did a podcast interview on that legacy with Richard James (below, right), who appeared both in my Oktober miniseries and as a regular in Anderson’s Space Precinct. 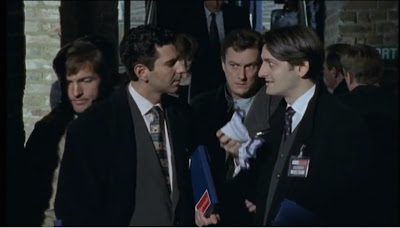 (And Charlotte Serpell, Richard’s wife, was Oktober‘s Assistant Editor. Some day, Charlotte, I swear by Grabthar’s hammer, we’ll see that gorgeous never-broadcast widescreen version out there on Blu Ray.) 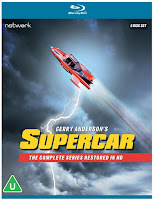 Speaking of Blu Ray, the Network Fun Facts were advance promotion for Supercar: The Complete Series limited edition. Box set doesn’t really cover it… it comes with a comic, a repro of the Mike Mercury pilot’s license, Stephen La Riviere’s Full Boost Vertical documentary, and Andrew Pixley’s comprehensive study of the production. When Andrew asked if I’d be interested in contributing a preface to the book, my first impulse was to say that, more than be interested, I’d even pay him to let me write it. This was something I decided to keep to myself, lest he take me up on it.

Now I don’t know for sure that it was the prop from the ice show that’s shown in the picture, but what were the chances of there being two? Not sure who the woman is, either, and Mike Mercury’s looking a bit like an elderly school caretaker.

Over on Blogger, where the original of this post appeared and is still available to read, an anonymous commenter has supplied the following:

Hi. I have been looking for a long time to find anybody who can remember the full size Supercar. I still remember quite clearly the Sunday it was loaded on to the wagon to take it to the London Palladium. My dad helped to make it and on several occasions I would go with him to the workshop and help my dad, mind you, I was only ten at the time so just how much help I gave him is questionable. There was a problem with it on that day as the plan was for it to drive on under its own power as it had a electrical motor and a battery but for some reason they couldn’t get it working in time. They had to push it out of the workshop and I was lucky enough to sit in it while it was being pushed. On the night they put it on the rotating part of the stage and with all the smoke it looked like it was moving on it own and at the end of the show it was as you said it was put on the elevated section. I often wonder what happen to it. At least I still have the photo that my dad took of me standing in front of Supercar.

Thanks so much for those memories! You’ve validated a vivid childhood impression for me. I recently migrated this blog and its contents to my revamped website (www.stephengallagher.com) and I’ll copy your comment over to the article there.

And if you’ve a scan of that photo that you’d like to share online, I’d be happy to include it.