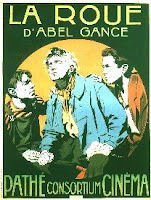 I just heard that Abel Gance’s monumental La Roue is to be released on DVD May 8th.

La Roue was Gance’s major project before his five-and-a-half hour Napoleon. It’s an epic Zola-esque love triangle set against the iron and steam imagery of the French railways. I’ve been wanting to see it ever since I read Kevin Brownlow’s piece in The Parade’s Gone By, near enough 30 years ago.

Made in 1923, four and a half digitally restored hours. I told my wife and somehow she didn’t seem excited. Mustn’t have sunk in yet.