Luther, Follower, Bryan and Me 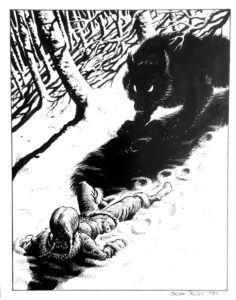 A justified stir was caused last month by the announcement that production company Three River Studios has optioned the Luther Arkwright story cycle of my old friend Bryan Talbot for TV series development. From his roots in the underground Comix scene Bryan was a pioneer of the adult, epic graphic novel form, and the influence of the Arkwright books is acknowledged by creators throughout the industry.

Back when Bryan and Mary lived in Preston their Georgian terraced house on Bairstow Street was something of an international hub for genre talent. It was mainly thanks to Bryan’s efforts as recruiter and host that the Preston SF Group was able to offer close to two decades’ worth of free public events featuring current and future superstars of comics and literature. I should add that I managed to snare some great A-listers as well, but my hustle was nothing compared to Bryan’s.

Follow the link and scroll all the way down this list and tell me I’m wrong. The evenings would generally begin with a bunch of us taking the night’s guest to a local curry house before relocating to whichever pub was currently willing to let us have a function room at no cost. The pub event was open to all. A raffle of publisher-donated items raised some cash to cover guest expenses and that was followed by the visitor’s Q&A with Bryan or me. After closing time it was always back to Bairstow Street for tea and chat into the wee small hours.

Good times. We all partied, went to conventions, helped out with each others’ projects. Bryan drew this illustration (above) for my novel Follower; the original hangs on my wall. I wrote a pitch treatment for an Arkwright movie for a couple of producers who’d approached Bryan and who – if I recall correctly – bristled at the idea that they should lay out any money for the rights.

(No such problem this time around, as the deal was made by Casarotto Ramsay‘s Ellen Gallagher. Yep, relation. In fact I should probably lay claim to the credit, much as my dad did when when he looked around the Chimera set…)

The wait was probably worth it. Back then the state of the art in genre TV was Buck Rogers and Manimal. Now we have Mandalorian-standard FX capabilities and the material can be done justice.