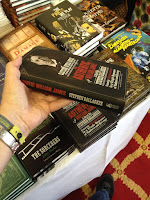 Just back from a weekend of frolics, wine and conversation at 2016’s Fantasycon by the Sea in Scarborough, a town of shabby-chic Edwardian charm with a fantastic coastline and some, er, interesting after-dark streetlife. The Grand Hotel made for a highly sociable venue in a spectacular clifftop location. Dining options on the doorstep, and some fine autumn sunshine for those moments where you just had to take time out and wander. I had a great time meeting up with friends old and new.

There was no single dealers’ room, as such, more a bazaar that spilled through small rooms and passageways off a corner of the main hall. I’m pretty sure I didn’t get to see everything, but I did get my first-ever sighting of the new hardcover in its finished form. I don’t even have my author copies yet, but PS Publishing regularly handles UK distribution of Subterranean titles and had rushed a stack of advance copies expressly for the convention. So, many thanks to all involved, with further thanks to those who bought out the stack!

A damn handsome piece of book production, if you ask me. I couldn’t be more pleased. The hardcover editions of both The Kingdom of Bones (Shaye Areheart Books) and The Bedlam Detective (Crown) were something to behold, and this new title equals and, dare I say it, surpasses them. Subterranean also holds ebook rights for US territories, details of which can be found here. I’ll have paperback news in due course.

The weekend was rounded off with the news that Ellen Datlow’s The Doll Collection won the British Fantasy Award for Best Anthology.

I get to bathe in a little reflected glory because my story Heroes and Villains is in the book. That story was the basis of my short play Cheeky Boy, part of this theatrical event. You may recall me banging on about it somewhat earlier in the year.

One response to “Meanwhile at Fantasycon…”