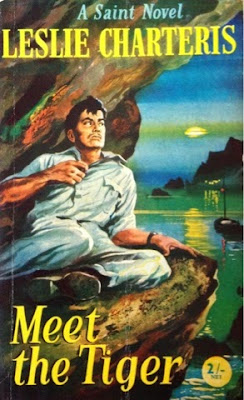 A happy find in Keswick today – Meet the Tiger was the first novel to feature Simon Templar, aka The Saint, and it’s been out of print for some time.

Charteris was unhappy with his tyro work viewed in the context of his mature prose, and withdrew the book. His widow continues to respect his wishes; the title isn’t included in the recent reissue of the otherwise complete Saint canon.
Two years ago I shelled out for a hardcover first edition, and I can report that LC had very little to worry about. The plot has flaws but the writing style and characterisation are well up to par with the later works. For a writer barely out of his teens, it’s an impressive debut.
And I don’t know about you, but I’m a sucker for a great old low-rent pulpy cover.

UPDATE: In the last available reprint of the novel published by Charter, New York, in September 1980, there’s an introduction written by Leslie Charteris himself and dated 21st March 1980.

In it he says “(Meet the Tiger) has been out of print for more years than I can guess at, and with no complaints from me. Personally, I would have been very happy to leave it quietly in limbo; I was still under 21 when I wrote it, more than 50 years ago, and am no more anxious to parade it than any other youthful indiscretion”.

He goes on to confirm his dissatisfaction with the contents, and follows this with: “However, I can’t deny writing it, its existence is a historical fact, and I suppose that anyone who is interested enough in backtracking into Simon Templar’s and my own adolescent beginnings has a right to access to the awful truths.”

This is the edition mentioned in the title’s Wikipedia entry as the last to see print. I don’t know whether it means that LC blew hot and cold over the book’s availability throughout his career, or if it was only after 1980 that the rights were returned to his control and he could put his wishes into action.