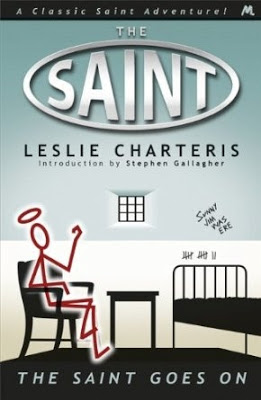 From Mulholland Books, with a June 20th publication date, comes this reissue of The Saint Goes On with an introduction by yours truly.

Mulholland is an imprint of Hodder and Stoughton, publishers of the classic ‘Yellow Jacket’ editions. So in effect, the thirty-five reprint titles are being kept within the family.

Their number does not, at this time, include Simon Templar’s first appearance in Meet the Tiger. Charteris’ widow continues to honour his wishes over keeping it out of print.

Here’s something of what I wrote:

“For me, the Saint of the early 1930s is as modern as the character gets; he’s hard, he’s principled, he seems to take nothing seriously but he can turn in a second. It’s all an act. And underneath it is a very, very bright guy indeed… this is the Saint as I’ve always liked him best. Here, he’s a man with a complete disregard for authority and a rigorous code of personal fairness. He lives high on money that he takes from thieves and the greedy rich. He appears to seek a life of luxury and entertainment, while nothing entertains him more than righting an injustice done to an innocent. But every now and again, we get a glimpse of the utter steel underneath.”

I had my pick of a number of titles, and I deliberately chose this one; it’s The Saint before the movies, the radio serials or the TV adaptations got to him, feeding back in and reshaping the character. Before the collaborators, the ghosts, or the tie-in writers moved in.