Neither Houdini, Nor Doyle 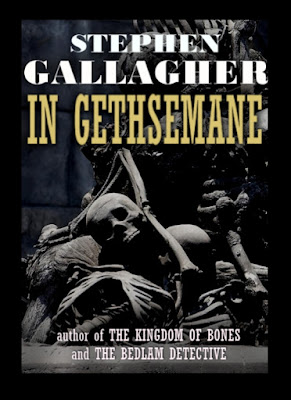 If you just want the free story, scroll on down to the links. Otherwise…

Back when we were wrapping up Crusoe for NBC, producer Jeff Hayes pitched me a TV project that a colleague of his was looking to set up. It was called Houdini and Doyle and it was about the real-life friendship between the two, transmuted into a mystery-solving partnership for series purposes.

And no, as far as I’m aware it bore no relation to the Fox/ITV series that’s currently on air. This particular historical pairing has a long history of producer appeal, and there have been a number of attempts to bring it into being.

In fact I’d already addressed it myself, kind of. I’d been inspired by another pairing of opposed ideologies when I read how, in the 1980s, convicted Watergate hardliner G Gordon Liddy teamed with LSD proselytizer Timothy Leary on a lecture tour titled Nice Scary Guy vs Scary Nice Guy. I imagined them going at it hammer-and-tongs during the debates and then retiring to the same hotel to unwind with a drink and divvy up the box office.

So long before that suggestion of Houdini and Doyle I’d written about the pairing of a spiritualist and a stage magician, based on their friendship but with characters of my own invention. Will Goulston is a stage magician, forced into a money-making venture after losing all his properties in a fire, while Frederick Kelly is raising money for a Spiritualist temple. Together they move from town to provincial town, maintaining a cordial relationship while rehearsing the same debate, night after night.

The man from the Blackburn Times said, “What are we going to see? Do we see physical manifestations?”
“Goulston does all of those,” Kelly told him. “You want to see a table tip and fly, Goulston does it better than anyone I’ve ever seen. I practice a form of clairvoyance that is far less spectacular. I handle objects and I say whatever comes into my mind. Rarely do I see more than that.”
“Do you raise the dead?” the Telegraph man said, and there was a tone in his voice and a look in his eye that seemed to urge Kelly to say yes, just so that the Telegraph man could go on into print and make him regret it.
“I do not raise the dead,” Kelly said and then he added, with care and certain emphasis, “Sometimes I believe the dead can speak through me.”
The Telegraph man switched his gaze. He looked like a bank clerk, but his manner showed the wiry energy of a whippet. “Mister Goulston?”
“Let me be diplomatic,” Goulston said. “I believe that Mister Kelly is an exceptional performer of his type.”
“Do you think he’s a fraud?”
“I have no doubt.”
“But no proof.”
“Proof will come.”

To me the notion appealed not for its mystery-solving possibilities, but for the light it shines onto a deep-seated conflict that lies within all of us. The magician embraces mystery, but he knows too much; his curse is that mystery can never embrace him back. And although I wasn’t familiar with the term when I wrote the story, you can say that Frederick Kelly is a ‘shut-eye’ medium, one whose belief in his own powers is sincere.

The novella’s available to buy on Amazon, but from tomorrow until Sunday May 15th you can download it to your device for free.

One response to “Neither Houdini, Nor Doyle”