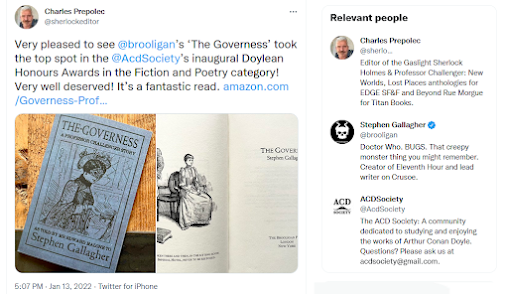 So look what popped up in my Twitter timeline yesterday, and I’m grateful to Charles for passing it on; The Governess, a chapbook put together as a labour-of-love lockdown project, has received this recognition from the Arthur Conan Doyle Society. The announcement came in its inaugural Doylean Honours Awards ceremony, streamed live from Manhattan’s Mysterious Bookshop.

The physical form of the book—the layout, the page settings, the font choices—is based on a first edition copy of The Poison Belt that I picked up for not much money just a week or so before Covid hit.

The W S Stacey and F S King illustrations, long out of copyright, are photographed from old bound magazines on my shelves. With the story already written, I combed through their pages in search of images that worked with the text. They’re all from different, unrelated pieces. To the spirit of the other artist whose name wasn’t given, I can only offer appreciation and an apology. 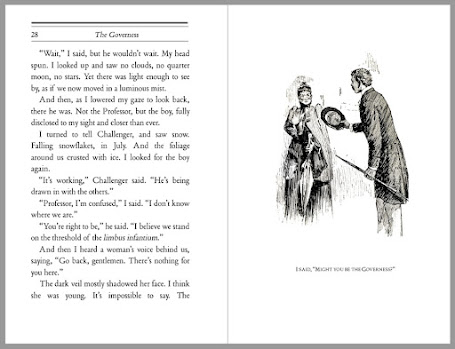 Mention Conan Doyle to most people and their thoughts will go straight to Holmes, but for me it was always The Lost World that fired the imagination. I’ve written elsewhere of the part it played in my Murder Rooms TV movie (covering an episode in the life of the young Dr Doyle that would inspire the later fantasy) and how it shaped some of the thinking behind The Bedlam Detective, the second of my three novels about the Special Investigator to the Lord Chancellor’s Visitor in Lunacy.

It was in The Bedlam Detective that I had something of a dry run for The Governess. It was in the form of a first-person chapter written in the Edwardian voice of Sir Owain Lancaster, leader and almost lone survivor of an Amazon expedition with a disastrous outcome.

The Challenger short story is narrated by The Lost World‘s Edward Malone, and features the Professor in his later role as a spiritual investigator. Doyle, as we know, was fully on board with the Spiritualist movement. I’m not, but here as in my earlier novella In Gethsemane I find it a potent source of metaphor and human drama.

Both of those pieces, I should add, will be included later this year in Comparative Anatomy: The Best of Stephen Gallagher, my mega short story colection from Subterranean Press. That will also include some new fiction.

But for now, you can pick up the chapbook here. Even if it’s only for the pictures. 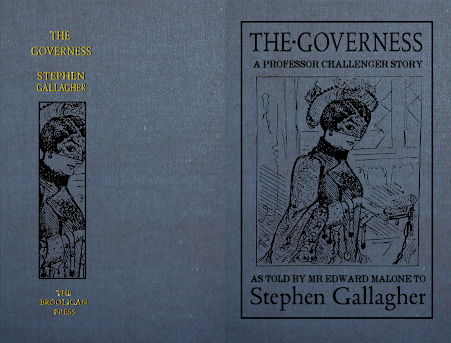 One response to “News, Unexpected”